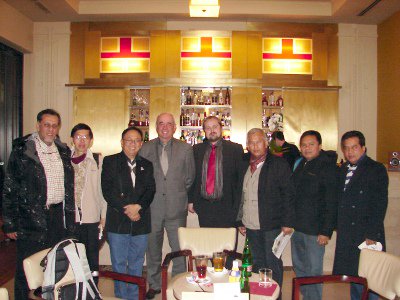 PRAGUE: In Europe for the upcoming ITB Berlin tourism and travel show, the Phuket delegation took time out of their agenda to talk waste-water.

Led by Phuket Provincial Administration Organization (OrBorJor) President Paiboon Upatising, the delegation met with the heads of two companies that installed and operate 13 waste-water treatment plants in the Czech Republic.

CEO of Prague Diamond Invest Dr Jan Kavalirek and Managing Director of Tradeco Praha s.r.o. Petr Brat’ka discussed waste-water treatment technology in the Czech Republic and how it could be used in Phuket.

The meeting was organized by the Czech Republic’s Honorary Consul in Phuket, Dr Anurak Tansiriroj.

Among the Phuket representatives were the mayors of Kathu, Chalong, Rawai, Karon, Srisoontorn, Cherng Talay and Thepkrasattri municipalities and the deputy mayors of Pa Khlok and Koh Kaew.

The delegates heard explanations of the companies’ “patented water cleaning system”, which is claimed to cost less to run, occupies smaller areas, but offers double the efficiency of most conventional systems.

“This system is very interesting. Today they presented only the basic information. They will email us the technical information later,” Mr Paiboon said.

“This information will be useful for local administrations in Phuket that do not have their own waste-water treatment systems,” he added.

The only areas in Phuket that currently have their own waste-water treatment plants are Patong, Kathu, Karon and Phuket Town, Mr Paiboon said.

Inadequate waste-water treatment in Phuket has come under criticism over the years, especially after the emergence of “red tide” algal blooms in places like Patong where they were never a problem before.

Meanwhile, the quality of water at Phuket beaches is increasingly scrutinized as the island’s officials attempt to gain higher star ratings in the Thai Pollution Control Department’s annual assessment of beaches throughout Thailand.

The meeting with the waste-water experts comes just one day before ITB Berlin, the world’s largest tourism and travel trade show, opens to trade visitors.

The show will be open to the public this Saturday and Sunday.