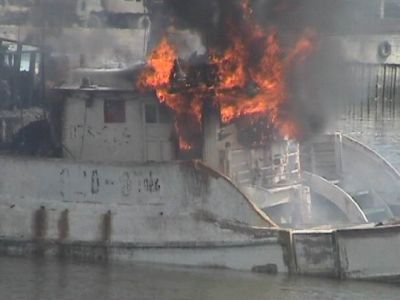 PHUKET TOWN: A tuna boat loaded with diesel fuel and bottled gas for a month-long trip burned to the waterline in a five-million-baht fire at Rassada on Saturday. The blaze was spotted about 11 am on Saturday but seven hours of efforts by seamen and firefighters failed to douse the flames and the boat was burned to a blackened hulk. Police were alerted to the blaze on the Taiwanese-owned Chin Fa Saeng by its captain, Hseng-Lian Chen, 32. The blaze began in the engine room and, fed by polystyrene insulating foam and the fuel, eventually destroyed all the equipment on board, including the radio and radar. Pol Maj Chockchai Suthimek, Inspector of Phuket Town Police Station, said there were no injuries but the vessel’s construction materials, designed to preserve a heavy load of fish, eventually defeated the firefighters. Police found no indication that the fire was set deliberately. It is believed the crew will quickly find berths on other craft.