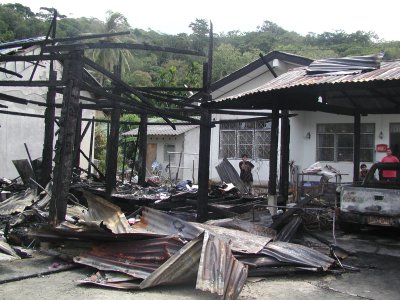 PATONG: One man is seriously ill in Phuket International Hospital after being badly burned during a fire that destroyed two houses in Phisit Gorani Soi 1 late last night.

After evacuating his family from the house, Chalermporn Jikpipaksit, 46, ran back into the blaze to remove a gas cylinder from his cooker so it would not explode. He suffered severe burns to his upper body in the process.

Suwanna Tamchoo, a neighbor and a relative of K. Chalermporn, said she had lost “everything” in the blaze.

“The fire broke out in K. Chalermporn’s house at around 11 pm. I heard people shouting ‘Fire!’ and we called the fire department. But by the time they got here, our cars were on fire and my home was burning.

“It seemed to take ages for them to get here … and there was a strong wind that fanned the flames.”

She added, “We had a fire extinguisher in our carport, but we didn’t think to use it because we were panicking so much.”

K. Suwanna said her family had lost two cars – a new Toyota D-Max and a Nissan NV – and two motorbikes, all of which exploded in the blaze.

Patong Fire Chief Visit Mathasoontornpoj denied that firefighters had taken too long to arrive at the scene. “We first received a call at 12:10 am, and we got there three minutes later,” he said.

“I think the victims were so upset that a minute seemed like a long time to them. And we did our best to stop the fire spreading to neighboring properties.”

He said that firefighters took about 90 minutes to put out the blaze.

Pol Maj Boonlert Onklang, from Kathu Police Station, said, “The total value of the property lost is 1,527,400 baht, including two houses, two cars and the personal possessions in the houses. Another two houses and a car suffered slight fire damage.

“It looks like the fire was caused by a short circuit,” he added.

Patong Municipality has already stepped forward and offered a 20,000-baht scholarship for K. Suwanna’s little sister to continue her primary schooling, and to pay to house the family while a new house is built for them.