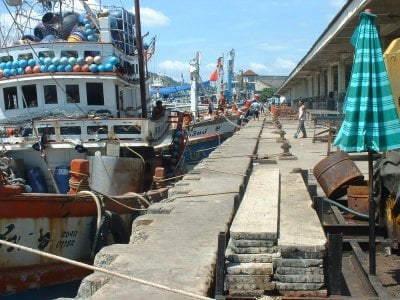 PHUKET CITY: The Cabinet has approved a plan to spend more than 300 million baht to improve Phuket Fishing Port in Tambon Rassada, and to build a seafood processing plant there.

The proposal, drawn up by the Ministry of Agriculture and Cooperatives, was approved by the Cabinet on Tuesday.

The Ministry of Agriculture and Cooperatives told the Cabinet that improvements would make it easier for Thai fish products to compete on world markets, and that, as the planned processing plant will meet European Union standards, fish and seafood processed there could be sold in Europe.

Port manager Pramual Rakjai said the project would create a 500-meter port alongside the existing 180m-long port, as well as increase the paved parking area.

He said the proposal had already passed an environmental impact assessment, so work could start immediately.

“If the Ministry of Agriculture and Cooperatives put this out to tender soon and has chosen the company to do the work by the start of next year, the whole project could be completed in 2006,” he said.

K. Pramual added that the port would stay open while the renovation was taking place.