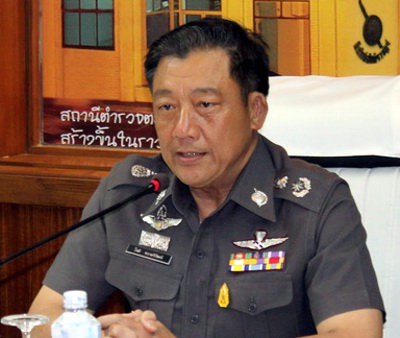 PHUKET: Police are offering a 100,000-baht reward for any information that leads to the arrest of the man who robbed a Kasikornbank (KBank) branch on the north side of Phuket Town yesterday.

The robber escaped with an estimated 2.7 million baht.

All six suspects either work for the bank, a related organization or are former employees of the bank, Maj Gen Choti said before going into a meeting to discuss investigation strategies with his deputy commanders and local superintendents at 10pm.

However, Gen Choti did not specify whether or not police believe the robber worked for the branch that was robbed, which opened on January 19 this year, or any other KBank branch.

“We have questioned witnesses and reviewed the bank’s CCTV footage, and I have ordered inspectors to follow the six suspects closely.

“The robber parked his motorbike in front of the bank and waited for about 20 minutes before going in and committing the crime,” Gen Choti said.

“As the robber’s face was covered by a full-face helmet, I would like to ask for the cooperation of the public. If anyone believes they have any information about the suspect, please let us know. We are offering a reward of 100,000 baht for anyone who provides information that leads to the arrest of the suspect,” he explained.

Gen Choti also gave the mobile phone numbers for himself and senior officers leading the investigation so that people may contact them directly with information: