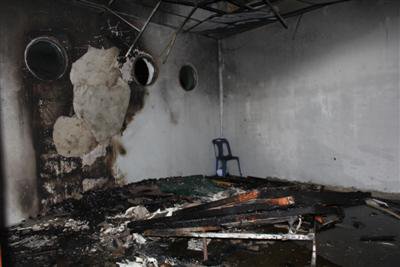 PHUKET: Another fire broke out at the Austria-Phuket Community Center in Phuket Town last night, the second blaze there in less than 24 hours. Police once again suspect teenagers, who probably broke into the building to take drugs, were responsible.

Phuket City Police at 9:10pm received a report of the fire from local residents in the densely-populated area, on the far east side of Phuket Town.

By the time Phuket City Police arrived at the scene, they found Phuket City Municipality firefighters assisted by Kusoldharm Foundation workers putting out the blaze, which broke out in a large storage room.

The fire came just 20 hours after another fire damaged the women’s restroom on the second floor.

It only took firefighters ten minutes to get the flames under control. Subsequent inspection revealed damage to tables, chairs, public relations signs and part of the ceiling.

The cause of the blaze has yet to be fully investigated, but police think it may have been caused by a group of teenagers who broke into the facility to consume drugs. Drug paraphernalia, including a pipe used to smoke ya Ice (crystal meth) was found at the scene of the fire that broke out at the center just 20 hours earlier.

Local residents told police they saw a group of teenagers enter the building before last night’s fire broke out.

The fire at the center was the third in recent weeks. The first, on April 21, caused minor damage to another storage room.

The center was built to serve residents of the sprawling Kan Keha public housing estate over the town line in neighboring Rassada and other residents of the area, home to the island’s fishing and fish processing industries.