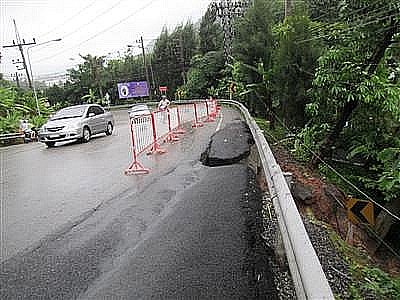 PHUKET: The monsoon season has officially arrived in Phuket and is already taking its toll, causing a landslide along a stretch of Patong Hill road that the Highways Department was hoping to shore up by year’s end.

Sampawat Wannasangkam of the Patong Municipality Department of Disaster Mitigation and Prevention said his office received a report of the slide at around 9am.

As an emergency measure his office coordinated with Patong Police in erecting a barricade to alert motorists to the danger.

“We are going to contact the Phuket Highway Office see what step to take next,” he said.

The slide coincides with the arrival of the southwest monsoon in Phuket. The Meteorological Department’s Southern Meteorological Center at Phuket Airport used the word “monsoon” for the first time this year in its synoptic report for the Andaman Coast region issued at 4am today.

The arrival of the monsoon was heralded with strong wind gust that were felt across the island yesterday, especially along the west coast. Wind driven waves offshore caused difficulty to several recreational dive boats, though no injuries were reported.

The 24-hour forecast for Phuket calls for cloudy conditions with widespread thundershowers covering 80 per cent of the province and isolated heavy rain with gusts and southwesterly winds of 15kmh to 40kmh.

Ship captains, crews and passengers are advised to proceed with caution as wave heights could reach three meters offshore.

Most of Thailand could experience heavy rains today. The Meteorological Department issued a “heavy rain and flash flood warning” at 5:30am today. It read:

“Active southwesterly winds prevails over Thailand and a low pressure cell over the Mataban Gulf [off the southeast Myanmar peninsula] will cover the western portion of Thailand. More rainfall occurs with very heavy [amounts] in some place in the North, Central, the East and the Southwest Coast. People in the areas should beware of heavy rain and flash floods. All ships in the upper Gulf and the Andaman Sea should proceed with caution during 5-9 May 2012.”