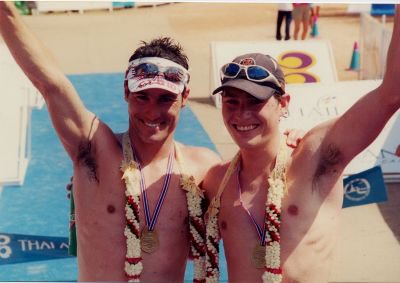 Speaking with the Gazette after completing his third Laguna triathlon, Alexander said, “Two years ago I won by four to five minutes. I had a large lead going into the run, so I could afford to take it easy. I think this one was definitely harder.

“What can I say? That was hard work. That was definitely a very hard-fought victory.”

Australian Nicole Hackett, in her first Laguna triathlon, won the women’s professional category, completing the course in 2:53.06. Hackett already has an outstanding athletic record; she was a member of the Australian Sydney 2000 Olympics squad, 2000 Women’s World Champion and has been ITU World Champion three times.

The first Thai across the finish line was Chadarak Chaigamjorn, who completed the course in 3:09.36 to place 30th.