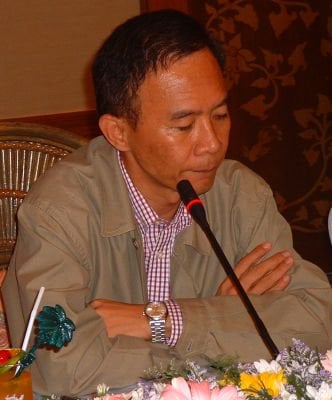 The Deputy PM chaired the meeting, at the Pearl Village Hotel at Nai Yang Beach, held to discuss the progress of various government policies on the island.

At the meeting, Santichai Euajongprasit, Vice-Governor of the Tourism Authority of Thailand, quoting the findings of a study conducted by a consultancy company, said that existing land at Saphin Hin was the most suitable site for the ICEC with Mai Khao Beach as the runner-up.

The proposal to reclaim land from the sea off Saphan Hin scored lowest in the report.

Proximity to city-center hotels as well as sea views were the deciding factors in the Saphin Hin proposal coming out on top.

K. Santichai was, however, unable to specify precisely which plot of land in Saphan Hin would end up as the site of the ICEC.

DPM Suwat said that Phuket Governor Udomsak Usawarangkura and Phuket City Mayor Somjai Suwannasuppana – as well as state agencies including the TAT – had been given the task of finding suitable land at Saphan Hin and had been told to present their findings to him within a month.

The issue was clouded further when the Deputy PM ordered the TAT to investigate sites on state land at Mai Khao Beach, and to look at the possibility of building the ICEC at the proposed “Chao Fa City”.

Suwalai Pinpradab, the Director of TAT Region 4, suggested as recently as Wednesday that the ICEC be sited in the planned Phuket International Night Bazaar (PINB), which is also slated to be built at Chao Fa City.

DPM Suwat said, “The government already has the budget earmarked for the ICEC and if we find suitable land, then the project can begin immediately.

“If the private sector [Chao Fa City] can show why their site is suitable, then the government may consider their proposal at the same time.”