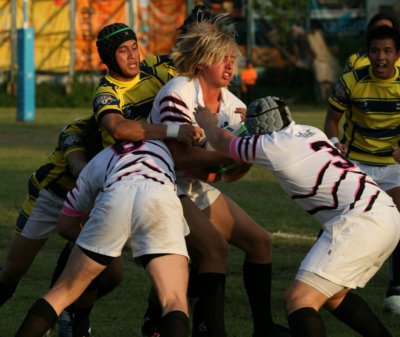 PHUKET CITY: Australia converted a last-minute penalty to beat Thailand 34-24 yesterday in a quality opening match at the international Rugby 80 tourney being played at Sanaam Chai in Phuket City.

The Thai national squad opened the scoring with a penalty in the 11th minute. Australia then rallied to lead 17-16 until the 42nd minute, when Thailand converted another penalty to lead 19-17.

With scores level at 24-24, Australia then stretched their lead to 31-24 before being awarded a penalty, which was converted in time to win the match 34-24.

The King’s Cup Rugby-80 tournament, being played at Sanaam Chai playing field opposite Provincial Hall on Surin Rd, will run until November 23.

Although teams from nations including Wales, England and France had expressed interest in taking part in the tourney, only four teams will compete this year: Thailand, Laos, Sri Lanka and Australia.

Tomorrow, Thailand take on Laos at 5:30 pm, followed by Australia against Sri Lanka at 7:15 pm.

Click here for more details and the match schedule of the Rugby 80 tournament.