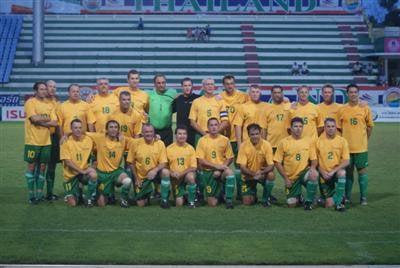 In semifinal play on Friday, Australia beat Thailand 3-0 and Iran beat New Zealand 4-1 to set up the final encounter.

The event was the fifth Seniors World Cup competition, all hosted in Thailand. Many of the Iranian players were World Cup veterans, while the Australian side consisted almost exclusively of former professional players.

Australia opened the scoring after 13 minutes when a long range free kick from John Hunter was fumbled into the net by the Iranian keeper.

Bobby Despotovski doubled the Australians’ lead after 45 minutes when he headed home a fine right wing cross from the outstanding Zoran Barovic.

Australia seemed firmly in control until they conceded a bizarre own goal after 60 minutes with a defender deflecting a harmless looking cross straight past his own keeper.

This gave the Iranians hope of an unlikely comeback, but Peter Murphy put the game beyond doubt after 75 minutes with a superb long range free kick which he curled around the wall and into the bottom left hand corner of the Iranian goal.

Several thousand people turned up for the final, mostly students from various schools around the island arbitrarily assigned to support certain teams.

Many of the Australian ‘youth supporters’ cleared out at half-time, but some 200 green-shirted students from the Baan Bang Tao School in Cherng Thalay stayed until the very end, enthusiastically cheering on the Iranians despite the developments on the pitch.

For a detailed account of the final match and other Seniors World Cup highlights, pick up a copy of the Phuket Gazette on news-stands from Saturday.