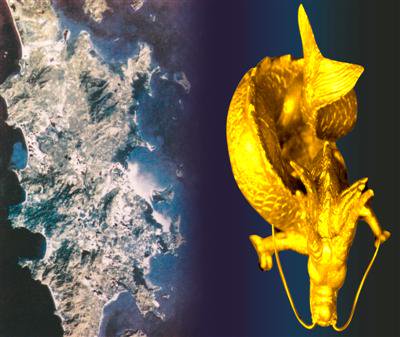 PHUKET: The proposed traffic tunnel beneath Patong Hill is drawing opposition from some unexpected quarters, as some elderly ethnic-Chinese residents of the island believe the project could ruin Phuket’s feng shui and bring economic ruin.

According to a Chinese legend, Phuket is a golden sea dragon emerging from the Indian Ocean. Tradition holds that this dragon, Hai Leng Ong, is duty-bound to protect Phuket and its visitors, sustaining life and prosperity in business.

The dragon’s supposed snout is Laem Phromthep, while its heart is in the vicinity of Phuket Town. The Nakkerd Range of hills running up the island’s southwest coast makes up part of the dragon’s long, curving abdomen that ends in a tail that curls back up over its torso.

So important to Phuket’s history is Hai Leng Ong that a large monument of the dragon is a feature attraction at Queen Sirikit Park in Phuket Town.

An explanation of the importance of the dragon also fills the first page of a tourist booklet distributed by Phuket City Municipality.

The importance of the sea dragon legend varies from person to person, but there is concern in some quarters that a proposed tunnel beneath Patong Hill connecting Kathu and Patong could ‘slay the dragon’.

The proposed tunnel is now the subject of a 40-million-baht study by a Bangkok-based team, which has already made its recommendation on the best possible route.

Supporters of the project say the tunnel would decrease traffic accidents on the treacherous Phra Barami Road, while opponents in the Ban Mon community say they would have to sell off their land under eminent domain law. They also claim the elevated roadway would pass over the National Memorial of His Majesty The King’s Footprint, which commemorates HM The King’s visit in 1959.

Now adding to the dissent are some members of the ethnic Chinese community.

Banjong ‘Ko Jong’ Damklam, 67-year-old manager of the San Chao Phor Suea (Tiger God Chinese Shrine) at the road pass over Patong Hill, said some people continue to maintain an active belief in the legend of Hai Leng Ong – and fear that the proposed tunnel route would go through the dragon’s stomach, killing it.

“They also fear that if another tsunami happens seawater could pass through the tunnel and inundate Phuket Town,” he said.

Mr Banjong said any tunnel work should only proceed after the spirits have been appeased.

“If the people insist on the project, I suggest that before construction begins all persons involved in the construction should come to the shrine on Patong Hill to perform a ritual ceremony asking for forgiveness. This should make everything run smoothly,” he said.

Even if a tunnel does eventually become the favored route between Patong and Kathu, Mr Banjong is not unduly concerned about the number of visitors coming to the shrine, which relies on donations.

“I think the tunnel will not affect number of people coming to the shrine. Its location is at the highest point [in the hill pass] and people who worship at this sacred place will not stop coming here,” he said.

Famous fortune-teller, feng shui doctor and radio personality Ajarn Prasith Jantharasuth said, “I have heard many times that people say the tunnel will kill the dragon and break the feng shui of Phuket, but I disagree. I think they should study the science of feng shui and the shape of the dragon in detail first before weighing in on this topic,” he said.

Ajarn Prasith said that some believe it is the dragon’s heart, not the stomach, that lies inside Patong Hill.

“I think the tunnel could go under its heart, but I have to study in detail to know exactly where the heart lies and which is the best route for the tunnel to avoid it. I can guarantee there won’t be any problems if the tunnel doesn’t pass through the dragon’s heart,” he said.