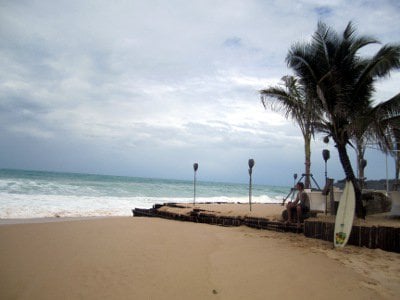 PHUKET: An Australian tourist found unconscious by the side of the road near Surin Beach has died from heatstroke, Phuket rescue workers have reported.

A Cherng Talay Tambon Administration Organization rescue worker’s unit based at Layan Beach received a report at 2:39pm on Wednesday that a man had fainted by the road about 200 meters from Surin Beach.

When the rescue workers arrived the found a group of tourists trying to help the man, who was still breathing.

The rescue team rushed the man to Thalang Hospital, where medical staff performed CPR for two hours before doctors pronounced him dead.

The initial cause of death was given as cardiopulmonary failure, possibly brought on by heatstroke.

Thalang Police duty officer Lt Col Somkid Khaosang identified the deceased as 65-year-old Michael Lester. He was staying at a hotel at Surin Beach during his holiday in Phuket.

Relatives have been informed of his passing, a source in the Australian diplomatic mission in Thailand has confirmed.

Mr Lester’s death came two days after another Australian tourist, 34-year-old Mr David Sean Fuster, died of natural causes at the Evason resort in Rawai. His passing was confirmed by Capt Chianchai Duangsuwan of the Chalong Police, who said the death was reported at 6:20am. There is no suspicion of foul play, he said.

Mr Lester’s death comes as the Thai Meteorological Department (TMD) predicts that Wednesday through today will be the hottest days of the year in Thailand.

Khao Phanom Hospital in Krabi has reported four heat-related deaths since April 13. The latest was identified at 47-year-old Paiboon Phanapitakul, who died of heart failure while working in a palm plantation in Khaodin subdistrict at 1am yesterday.

Temperatures across Northern Thailand today are again expected to climb past 40ºC, and the MET has issued a “Summer Thunderstorm” warning at 5am today.

A high pressure system from China is extending its ridge to cover the Northeast of Thailand and the South China Sea, while hot to very hot weather is likely over all of Thailand. This will cause summer thunderstorms – that is, thunderstorms with gusts and hail – in upper Thailand, especially in the North, the Northeast and the East, said the warning.

With a southwesterly wind prevailing over the Andaman Sea and Southern Thailand, scattered to fairly widespread thundershowers and isolated heavy rain is likely in Phuket and other west coast provinces, the warning added.

According to TMD records, temperatures at the two monitoring station in Phuket – one in Phuket Town, the other at Phuket Airport – have never surpassed 40ºC.