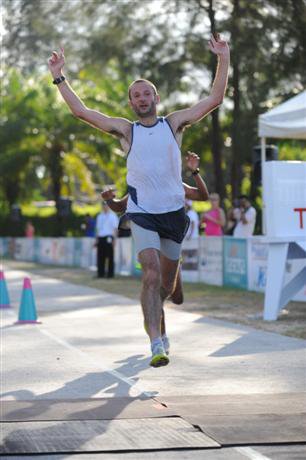 A record 4,500 runners and walkers from more than 25 countries gathered at Laguna Beach Resort in the early hours of Sunday to contest five separate events: a 42-kilometer full marathon, 21km half marathon, 10.5km run, 2km “kids run”, and a 5km walk for charity.

The first wave of unseeded marathon runners set off at 4am. Among them was world famous “slow runner” Hajime Nishi of Japan, creator of the “eco-marathon” concept and the first person to complete marathons on all seven continents.

They were followed an hour later by the second wave of seeded runners, which included defending champion Paine.

Coming into the event the Australian said that he felt he wasn’t in the same shape he was in 2008, when he set the Laguna Phuket course record.

But Paine showed few signs of rust when the air horn sounded to start the race, immediately taking the lead as the pack left Laguna Beach Resort and never looking back. Paine finished almost 25 minutes ahead of his nearest rival in 2:39:23 – just outside of the time he set in 2008.

In the women’s marathon, Katja Fink of Switzerland took full advantage of the absence of 2008 champion Angela Louise Stevens, claiming her first Laguna Phuket Marathon title in a time of 3:34:04, just over one minute ahead of Reesa Simmonds of Canada.

The race of the day came in the 21km half marathon, with Thai running star Patcharee Chaitongsri shattering the previous course record by more than four minutes on her way to victory in 1:25:23. Ms Patcharee was pushed all the way to the line by Singapore’s Vivian Tang, who finished just 12 seconds later to take second.

In the men’s event, Swiss runner Cedric Aspsi Loichart claimed victory in 1:16:47 ahead of the heavily-favored Paul Kisumba Wayoke of Kenya. Wayoke led Loichart by almost 30 seconds at the halfway mark, but began to tire over the second half of the race, allowing Loichart to come through and win.

Jason Mayeroff, winner of the 2002 Bangkok Marathon, opted to run in the 10.5km race.

He dominated from the start, smashing the course record by more than two minutes. The veteran runner from the United States later revealed that he will compete in the full marathon in 2010 in a bid stop Paine from completing a hat trick of titles.

Elsewhere, 800 people took part in the 5km sponsored walk that saw funds raised for charities both in Phuket and further afield.

Phuket to Montana: Thanks for a great event!