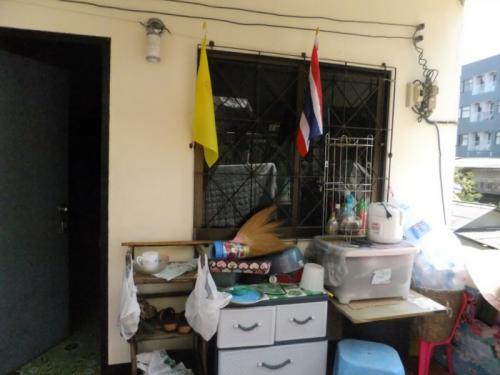 PHUKET: A Phuket cigarette vendor who was born with a deformed leg and no hands is on her way to getting a new prosthetic limb, thanks to an Australian visitor and an aluminum recycling project.

Wilaiwan “Wan” Damnui, 33, has been selling cigarettes and chewing gum on Bangla Road for 17 years. In 1999, she received a plaster leg, but it is now broken and uncomfortable.

“I’m fine the way I am, I just need legs,” she told the Phuket Gazette.

“Legs are more important because they can take me where I want to go, but I don’t know how to get one. My income is low, about 200 baht a day from selling cigarettes,” said Ms Wan, who lives alone in a rented room in Patong.

Enter Derek Clarkson, a 75-year-old Australian who has been coming to Thailand for seven years.

“I come here mainly to ride a motorbike through this beautiful country,” the former professional wrestler said. “I’ve travelled over most of the mainland, and I always find a week to visit Phuket before I go home. I’ve made a lot of friends in Patong and Karon.”

About 4 or 5 years ago, Mr Clarkson first noticed Ms Wan.

“I saw her every night on Bangla Road selling cigarettes and gum. Despite her disability, which obviously makes getting around and doing things difficult, she has a positive attitude and a smile for everyone,” he said.

“I was touched by her independence. She’s not begging, she works – every night. I think she deserves to be helped. I tried to give her money, but she wouldn’t take it. I had to buy something from her!”

Mr Clarkson found a way to get Ms Wan to accept his donations: he folded up his bills so she couldn’t see how much he was paying her until he’d left the scene.

“I would like to help her have a better life. I’ve been saving money for nearly two years in order to pay for a new leg for her,” he said.

A language divide left Mr Clarkson and Ms Wan unable to work out the details of getting a new prosthesis, so Mr Clarkson contacted the Gazette for help.

The answer lay not with a medical center, but with the Phuket Regional Environment Office and their project that turns recycled aluminum into prostheses (story here).

Pornsri Suthanarak, the director of the office, was eager to help.

“I have already contacted the Pollution Control Office in Bangkok. If she meets the physical and economic criteria, we should be able to get her a new aluminum leg for free,” she said.

“The Pollution Control Office in turn will contact the Prostheses Foundation of HRH The Princess Mother as we have a memorandum of understanding to help people.”

“The process could take time, up to three months, but I believe we’ll be able to get her a new leg.”

Mr Clarkson will return home at the end of February.

“I hope that the next time I come to Phuket I will see her with a new leg, walking normally,” he said.