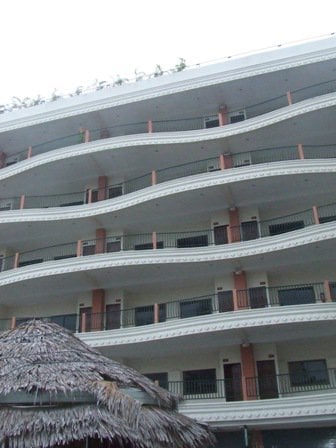 PHUKET: The family of Australian tourist Marc Gerard Hoy, 34, who fell to his death from the sixth floor of a Phuket hotel last weekend, have expressed doubts that he committed suicide.

“His relatives in Australia are finding it difficult to believe that he jumped off the building, but I told them that I have CCTV footage as evidence and invited them to come and view it,” said Patong Police Duty Officer Pattapee Srichay.

“I’m not sure when his relatives will come to see me. Right now I’m waiting for the Australian Embassy to reply,” he said.

Mr Hoy had worried staff at the Bel Air Resort Phuket in Patong by behaving strangely, they said, when he checked in at 3am last Sunday morning.

A hotel receptionist, who asked not to be named, told the Phuket Gazette that she discovered Mr Hoy sitting silently in the hotel reception in the early hours.

“I tried talking to him, but he just stared fixedly at our security guard,” she said.

Eventually, Mr Hoy replied and asked to check in. As he filled in the guest form, the hotel security guard, who also asked not to be named, noticed the handle of a small knife poking out at his waist.

Not long after Mr Hoy checked in, the security guard went to check on him as he was afraid something bad might occur.

“I saw him dancing on the balcony so I asked him to go back into the room,” said the guard.

Around 5:30am, a Chinese tour guide staying in the hotel came down to tell the receptionist that he had seen a lot of blood on the sixth floor.

Staff were said to have immediately called Patong Police, who came to the hotel together with Kusoldharm Rescue Foundation workers and officers from Patong Municipality’s Department of Disaster Protection and Mitigation (DDPM).

Mr Hoy, who was covered in blood, reportedly began throwing his bloody possessions off the balcony, including his passport and a key from another hotel where he had checked in the previous day.

He climbed over the railing and crept along the balcony to the corner of the building while clinging to the bars.

Police attempted to persuade Mr Hoy to climb back inside, but he refused.

DDPM officials placed a large inflatable cushion on the ground below.

After about three minutes, Mr Hoy jumped. On the way down his body hit the tin roof of a building below before hitting the cement ground, missing the cushion.