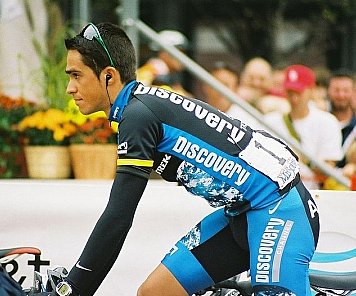 PHUKET: “The idea victory could be taken away if I win, I just find ridiculous.”

Alberto Contador vents his frustration at being left in limbo before the start of this year? Tour de France. The most famous bicycle race begins this Saturday.

The three-time Tour de France champion was cleared by the Spanish Cycling Federation over a positive clenbuterol test during last year’s race, but the World Anti-Doping Agency has appealed to the Court of Arbitration for Sport over the lifting of Alberto Contador’s doping ban in Spain.

A decision has yet to be reached and should the World Anti-Doping Agency win their appeal and Contador again wins the Tour, the Spaniard would lose both titles.

Contador is hoping to become the first man to win the Giro d’Italia and the Tour de France in the same year for 13 years, when the late Marco Pantani achieved the feat.

Pantani (The Pirate) was also the last man to win the Tour before American Lance Armstrong embarked on a record-equaling five straight victories. The ill-fated Italian was found dead in a hotel in Rimini in 2004 after he was found to be taking performance enhancing drugs and fell into a state of depression.