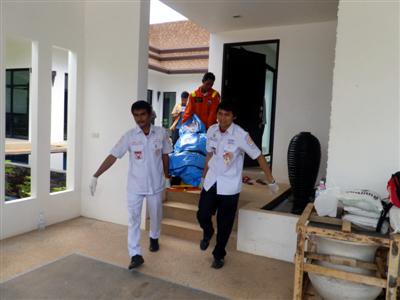 PHUKET: An Australian expat took his life by hanging in a luxury home under construction in Phuket, it was discovered this morning.

Thalang Police were notified of the apparent suicide at 10:30am by the wife of the victim, 38-year-old Australian Daniel Cruwys.

When police and Kusoldharm Foundation workers arrived at the scene, an upscale home in Pa Khlok, they found the late Mr Cruwys hanged by the neck from a nylon rope tied to a ceiling fixture in the home’s CCTV monitoring room.

A note written to the wife of the deceased indicated that they had a daughter together.

A review of CCTV images showed Mr Cruwys entering the home at about 5pm yesterday and fashioning the noose he used to hang himself at about 6pm.

Police believe he took his life at about 7pm

When he failed to return home last night, his wife drove up from their other home in Chalong to investigate and found that he had taken his life.

Mr Cruwys was employed by a well-known legal assistance firm and lived in Phuket for many years.

In a handwritten note left at the scene, he professed his love for his wife and apologized for “being the one who lets the team down” and leaving their daughter without a father.