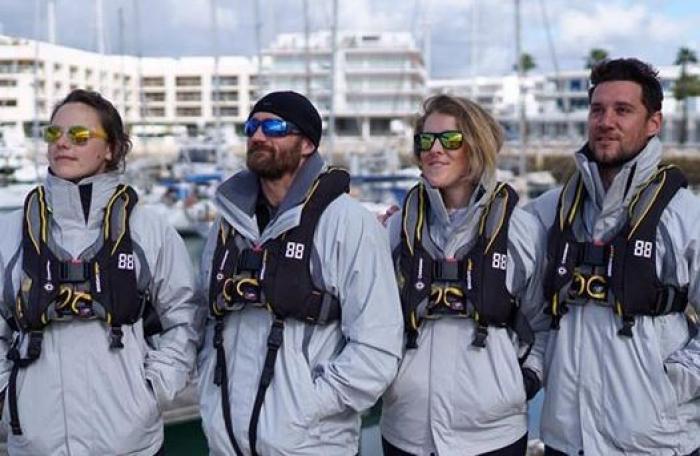 PHUKET: Australian head coach at Phuket’s Unit 27, Luke Richmond, has joined a team of three extraordinary adventurers as they attempt to set a Guinness World Record by rowing more than 6,000km of open sea, travelling from Portugal to Brazil.

Mr Richmond – already in peak condition from incorporating a NeuroPhysics training program from Ken Ware into his weekly schedule of crossfit, climbing and adventure training – was invited to join the rowing challenge after one of the team members was struck with appendicitis just two weeks from their scheduled departure. Without hesitation, Mr Richmond jumped on a plane to meet with Susannah Cass from Ireland, Mel Parker from the UK, and Jake Heath, also from the UK.

“I said yes immediately, without a single second of hesitation. Nothing can really prepare you for a task of such monumental undertaking, but I knew I had a skill set that could give it one hell of a go,” wrote Mr Richmond on Facebook.

“I have used the term, ready for anything, many times while coaching classes in fitness. If the world economy collapsed tomorrow, or if an environmental disaster struck are you capable of physically and mentally surviving. I have always prided myself on being ready, and above all else ready for adventure.
In the past five years, I have climbed the biggest mountains on six continents, been held captive in West Papua, have trained at my absolute best, endured many suffer-fests on expeditions around the world and have loved every moment of it.

“Adventure has been a big part of my life and I am about to embark on my biggest challenge so far. I am very grateful to the team for giving me an opportunity to attempt this row with them, and when we are in the middle of the Atlantic and [we are] suffering together, I will be truly honored.”

Originally set to depart on February 21, the team’s 50-60 day journey was delayed due to a large, inbound weather system. Fortunately for Mr Richmond, the delay gave him invaluable additional training time as he dives into the deep end with no previous outdoor rowing experience.

“This delay does allow us time to refine our set-ups on board, go through all support and safety systems and get in a long sea trial that we will head out on tomorrow before the weather sets in,” Mr Richmond wrote. “The hardest part will be what I call the ‘suffer-fest’. Constant pain from sea sores and chaffing with little sleep. It will be a mental battle. Two hours rowing with two hours rest for 24 hours, about 50-60 days.”

The team is set to depart today, with rations for 75 days.

The suffer-fest is timed to coincide with the Olympic venue making its crossing from London to Rio de Janeiro. The Row2Rio team created the challenge to honor the Olympics. The team intends to follow the Olympic journey using sheer human power through a combination of rowing and cycling. The team will first cycle from London to Portugal, then rest up and prepare for the sea leg. Once they touch shore in Rio, the three original team members will be saddling up for the last leg of the journey to Rio.

The route itself has never before been completed, meaning that the Row2Rio team will be the pioneers. With full backing from the Ocean Rowing Society and support from ocean rowing experts, they have plotted a route that will allow them to complete the journey using only an ocean rowing boat, bicycles and the four team members’ determination.

Though the challenge is set to pay tribute to the athletic feats of man, it is also raising funds for Macmillan Cancer Support – an entirely different kind of battle and test of the human mind and body.

“We fully support their ethos that no one should face cancer alone, currently one in four people are isolated facing cancer. Our target is £200k of which £75k will be to fund the boat (which we’ll sell at the end and donate the proceeds to Macmillan) and £125k for the charity, which is enough to fund two Macmillan Nurses for two years,” explains the Row2Rio website.

Follow the team’s journey on Facebook at Row2Rio or support their efforts to raise money for Macmillan Cancer Support by clicking here.