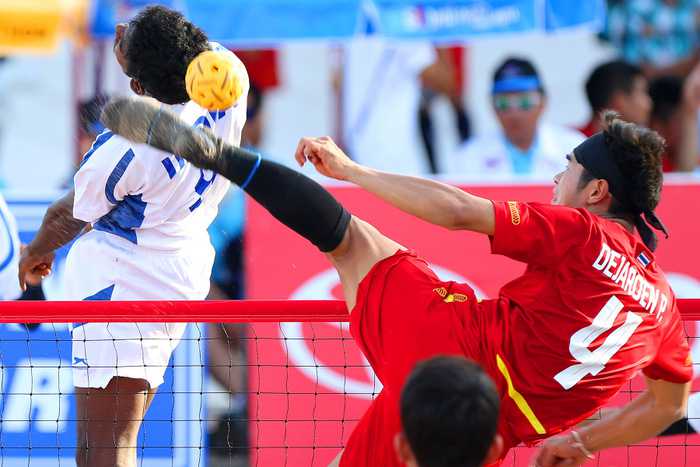 Despite another searing day in the seaside resort, crowds of Thai spectators and tourists braved the sun to watch the fun-packed competition on Phuket’s beaches and venues at Karon, Patong, Nai Yang and the Saphan Hin Sports Centre near Phuket Town.

Thailand A’s Sittichai Sangkhachot and Nuttanon Inkiew, who went down to Iran 2-1 on Sunday, struggled past Sadiq Almohsen and Hasan Qapqoor of Bahrain 21-19 21-12 in their second clash.

“We lost our first encounter on Sunday and we couldn’t afford another defeat today. We had to play more carefully in this crucial match. It’s hot, but the blazing sun didn’t affect our performance. We get a rest day on Tuesday [today] and resume the competition the following day. I just want to do my best here, so we haven’t set any target,” said Nuttanoonn Inkiew.

In the basketball at on North Karon Beach, Thailand’s men and women scored victories. The hosts’ women’s cagers thrashed Turkmenistan 15-10 in their Group B preliminary clash, while the men outclassed Bhutan 12-5, also in Group B preliminaries.

The Thailand beach soccer team, who beat Kuwait 2-0 to survive a first-round exit for the first time, narrowly edged Vietnam 5-4 in their first-round Group A encounter at the Saphan Hin Sports Centre.

At press time, Thailand were dominant in the medal standings with 12 gold, 12 silver and 17 bronze medals.

Defending overall champions China had leapfrogged into second with six golds, four silvers and nine bronzes, followed by Mongolia, also on six golds. Kazakhstan were fourth with five golds, head of Japan with the same number.

A total of 17 gold medals are up for grabs in the 4th Asian Beach Games today (November 18) as follows.