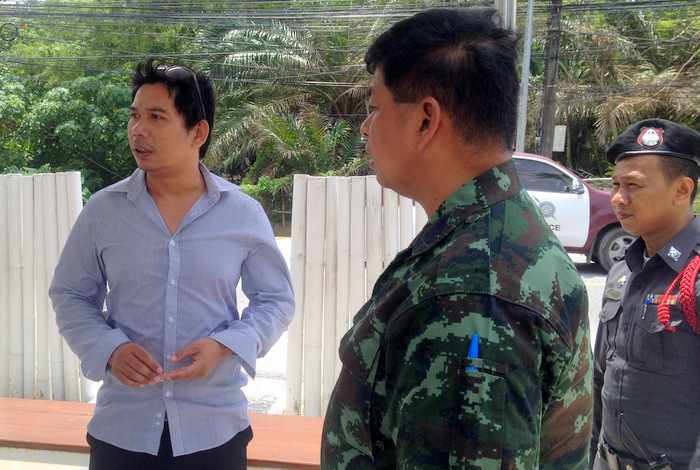 PHUKET: The owners of the White Box restaurant on the Kalim beachfront, north of Patong, have been given seven days to remove more than half of the restaurant – or have the army take it down for them.

The order was delivered this morning by Phuket Vice Governor Chamroen Tipayapongtada, who led officials and military personnel to inspect the venue – the second visit in four days (story here).

However, the restaurant was closed and the owner was overseas, explained the only representative present, who introduced himself as “Khun Andy” the caretaker.

The visiting officials could have guessed that the restaurant was closed by the sign in front saying, “Cause the director of the restaurant it is not in Thailand for clear the situation with the military we decided to close the restaurant until further notice.”

The sign, written in English, was dated July 26 – the date of the previous visit by Vice Governor Chamroen and his military entourage.

Regardless, V/Gov Chamroen today explained to Mr Andy that the owners had exceeded their building permit and had seven days to remove the offending structures.

“The building permit issued by Patong Municipality allows for only a one-storey structure to be built at the site,” he said.

“The 10-by-12-meter terrace and the second floor must be removed. Otherwise, after seven days, the military will come tear it down.”

V/Gov Chamroen explained to the press that the restaurant had a land title to occupy the site, though he did not elaborate precisely what form of title the landholders possessed.