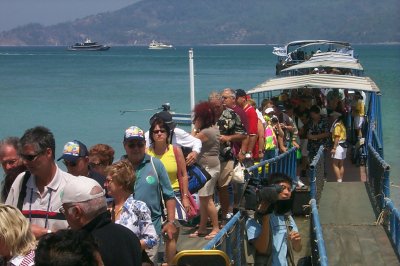 PATONG: Almost 60 days after the tsunami hit, the first large group of Australian and New Zealand tourists arrived in Phuket this morning aboard a Star Cruise ship.

Among those on hand to greet the 1,800 visitors were Tourism Authority of Thailand (TAT) Region 4 Director Suwalai Pinpradab, Phuket Tourist Authority President Pattanapong Aikwanich and a contingent of students from Patong Municipality Kindergarten.

The Thai youngsters received gift bags from the disembarking tourists, who will spend two days in Patong and enjoy a special seafood fair put on by the TAT to mark their arrival.

All visitors to Patong are invited to enjoy the fair, which will talk place along the pedestrian walkway at the southern end of the beach road.

Orachorn Saisrithong of SEA Tours, the Star Cruise agent in Phuket, said the arrival marks Star Cruise’s resumption of the use of Phuket as a port-of call after the tsunami.

The 2,000-passenger weekly cruise, which starts in Sydney and heads north to Singapore, had earlier replaced Phuket with Langkawi Island in Malaysia as its most northerly port-of-call.

K. Orachorn said regular arrivals would resume on March 7, now that the TAT had convinced the operator that Phuket is safe for tourists.

Festival to give Andaman coast a boost