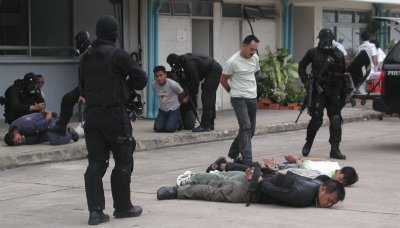 The hypothetical scenario involved of a band of terrorists taking hostages in a building at the port, where they detonate an explosive device. In the exercise, the building was stormed by special weapons and tactics (SWAT) officers, who cuffed the terrorists and loaded into the back of an open pickup truck.

The SWAT team from the Phuket Special Operations Unit, together with regular police officers, military personnel as well as emergency medical crews, converged at the scene – from their pre-arranged holding positions – some five minutes after the incident began.

Despite the fact that the training exercise was orchestrated for the assembled media and a number of unidentified foreigners, K. Vichan said that the multi-agency team who took part today would, nevertheless, arrive at any real terrorist incident anywhere in Phuket withing five minutes “…because Phuket is a small island.”

Inter-agency communication problems were cited by K. Vichan as the major problem. Not being able to garner enough information about the “terrorists'” personal history – to aid the negotiating process – was another area that would require more training, he said.

As for the reason behind the exercise, K. Vichan said, “All 76 provinces in Thailand are required to carry out anti-terrorist drills every year.”