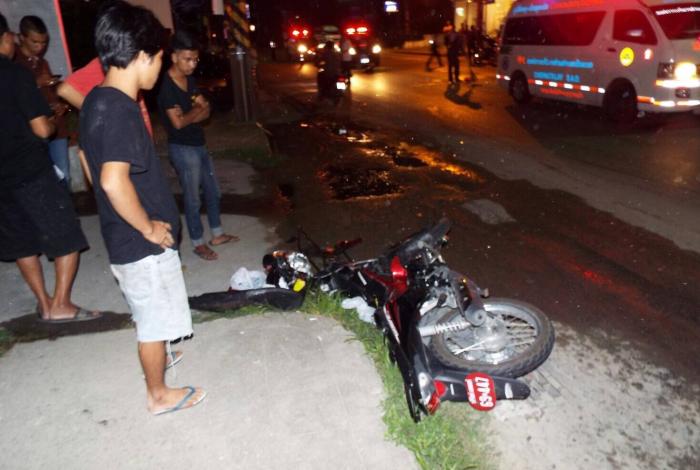 PHUKET: A motorcyclist was killed late last night in a head-on collision with a taxi in Cherng Talay.

Lt Col Rassada Kluengwong of Cherng Talay Police received reports of the incident at about 1:50am.

“We arrived to find the body of 43-year-old Sarayuth Duangjan lying face down on the asphalt in the middle of the road,” said Col Rassada. “Rescue workers confirmed his right arm was broken from the impact that landed him about 15 meters from the crash site.”

The taxi driver, named as Jarun Kritsun, waited for police at the scene.

“Mr Jarun said that he had been driving from Cherng Talay to Surin Beach when Mr Sarayuth, who was coming from the opposite direction, lost control of his motorbike and smashed into the right-front fender of his taxi. He told us that the victim was thrown off the motorbike following the impact.”

Police took Mr Jarun to the station for further questioning, and both vehicles were impounded as evidence.

“We will check CCTV footage to verify the driver’s statement,” said Col Rassada.