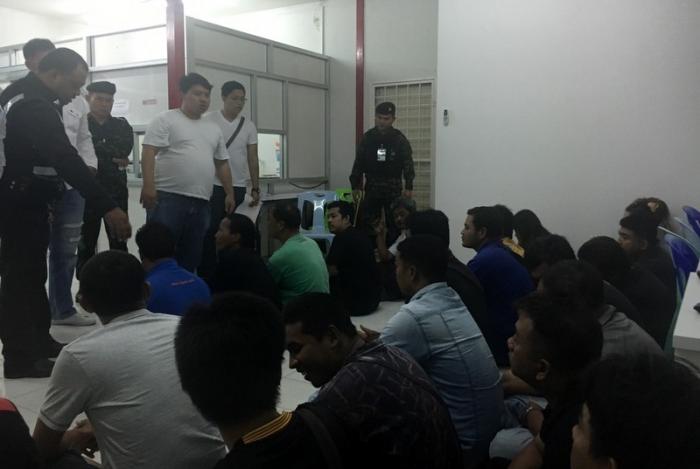 PHUKET: Twenty two suspected gamblers were arrested in Wichit during a joint police and military raid on Saturday.

The raid followed a similar bust in Wichit last week, during which police apprehended 16 suspected gamblers and confiscated more than 130,000 baht in cash as well as gambling paraphernalia (story here).

Approximately 30 Wichit Police and Army 41st Military Circle personnel raided a pop-up shop, allegedly constructed solely for the gamblers to bet on football. The man alleged to be running the pop-up gambling den, Somprasong Jaroenruangwong, was also taken into custody.

The officers, led by Wichit Police Superintendent Nikorn Suksom and Army Major Sathit Naikhun – based in Nakhon Sri Thammarat – seized over 16,000 baht in cash and gambling chips. Three computers were also confiscated from the gambling hall.

The ‘Step Up’ den was located at Soi Charoensup on Muangthong-Khao Khad Road in Wichit. Wichit Police told the Phuket Gazette that they were checking the criminal records of the suspects.

“We sent in our men to observe goings on until we were sure they were gambling,” Col Nikorn said. “So we went in at about 6:30pm and found the suspects either filling in gambling forms or watching TV. We rounded them up and took them to the station.”

Mr Somprasong was charged as the proprietor of the gambling operation, while other players were charged with gambling.

A joint task force also arrested 66 suspected gamblers and confiscated over half a million baht worth of gambling paraphernalia during a raid of a gambling den in Krabi late last month (story here).