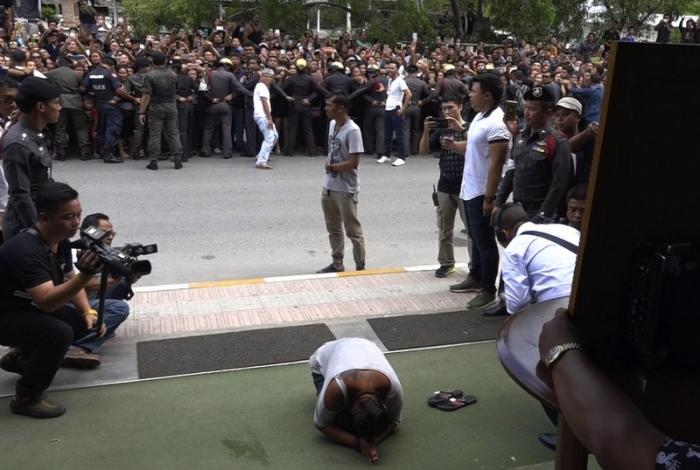 PHUKET: A man in Mai Khao and a woman on Koh Samui were arrested yesterday after allegedly posting negative comments about royalty on social media.

The arrests were catalyzed by mob demonstrations against the alleged commenters.

Tah Chat Chai Police, responding to repeated complaints, moved against the suspect named as Manorussadin, at his house in Mai Khao. Police are withholding his last name.

“When we arrived at his house, his father told him to come out to talk to us, but he refused to leave his bedroom,” Tah Chat Chai Superintendent Prawit Suttiruengarun said. “From outside, we could see Mr Manorussadin holding a knife, pacing around the room and talking to himself. Eventually, his father opened the door, letting us in.”

“We found a methamphetamine (ya bah) pill in his room, so he was charged with possession of a Category 1 drug,” Captain Prawit said. “We’re still collecting more evidence concerning the royal defamation accusations.”

Yesterday afternoon, more than 1,000 people gathered at Bo Phut Police Station on Koh Samui, after a woman was arrested for allegedly making defamatory comments about royalty on Facebook.

She was arrested at Thong Krut pier and then, in front of the crowd outside the police station, prostrated herself below a portrait of the late monarch. Police did not reveal whether any action would be taken.

The latest arrests follow the detention of a Phuket man on Saturday, who was charged with lese majeste early that morning after hundreds of angry locals had gathered in front of his shop, protesting against his alleged negative social media posts regarding royalty (story here).