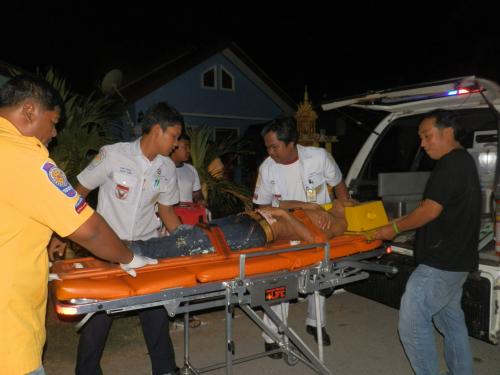 PHUKET: Police are searching for the wife of Baan Don villager Boonsri Kummongkhun after he was found stabbed in the stomach at his central Phuket home last night.

Thalang Police were notified of the incident by Baan Don village headman Sirichat Junthawat at about 9:30pm, after neighbors heard Mr Boonsri’s cries for help.

Rushing to Mr Boonsri’s assistance, neighbors found him collapsed in front of his home.

Mr Boonsri, 40, had been stabbed in the left side of his abdomen.

“We were told that his wife could not cope with him [Mr Boonsri] becoming insanely jealous over small things,” the officer said.

Some reports detailed that previous arguments between the two had turned violent.

“Apparently, Mr Boonsri was prone to hitting his wife when he was drunk and angry. He reportedly had beaten his wife several times, sometimes quite severely,” the officer said.

“We believe Mrs Nucharee fled after stabbing her husband. We are searching for her, and believe she is staying somewhere in the area,” the officer added.