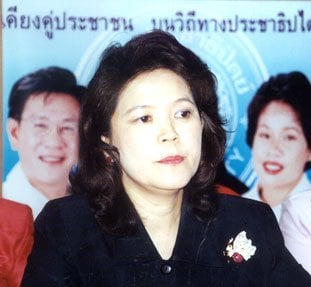 BANGKOK (The Nation, Phuket Gazette): The Democrat Party yesterday agreed to have party-list (unelected) MP Anchalee Vanich Thepabutr resign from Parliament so she can contest the Provincial Administrative Organisation (OrBorJor) election in Phuket. Democrat spokesman Ong-art Klampaiboon said Anchalee will run with the aim of becoming OrBorJor president, a post soon to be vacated by Dr Prasit Koeysiripong, who recently announced he was dropping out of politics. The party will bring up a lower-ranking party member to fill K. Anchalee’s Parliamentary seat. Anchalee will be one of eight Democrat party members running for OrBorJor presidencies in eight provinces. K. Ong-art said the party would also register 96 candidates to run for positions as OrBorJor members and three more candidates to compete for posts as mayors of municipalities. K. Anchalee was not available for comment today, but it seems that the decision to have her run in OrBorJor elections may be an attempt by the Democrats to counter the ruling Thai Rak Thai party’s entry into local politics in Phuket, backing the OrBorJor Gao Mai TRT party led by Samroeng Chaisorn. Like much of southern Thailand, Phuket has traditionally been a Democrat party stronghold. Both of Phuket’s incumbent elected MPs are Democrats.