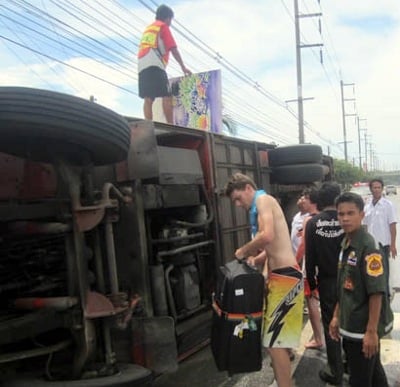 PHUKET: A tour bus carrying Australian and American tourists heading from Krabi to Phuket flipped and slammed into a wall of a house in Phang Nga early yesterday afternoon.

Seven of the 18 tourists on the bus were taken to hospital. The rest were administered first aid by rescue workers and then taken to their hotel in Patong.

Officers at the Phang Nga Department of Disaster Prevention and Mitigation office today confirmed that all seven tourists had suffered minor injuries only and had been already released from hospital.

The 35-year-old driver, Prayuth Phutubtim, told police that he hit a large pothole not far from Wat Loh Yoong in Takua Thung, just north of Phuket.

The pothole punctured one of the back-left tyres, causing Mr Prayuth to lose control of the vehicle. The bus then flipped onto its side and crashed into the wall of a house.

“We will continue our investigation into the crash,” said Khok Kloy Police Superintendent Somchai Tanprasert.