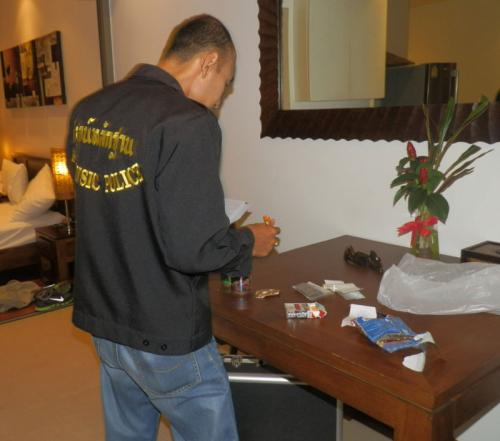 PHUKET: A 23-year-old American tourist was found dead in his Cherng Talay hotel room by staff after he failed to checkout at noon yesterday.

Staff at the Resident Resort and Spa Retreat called Cherng Talay Police at about 10:30pm to report the death.

“When we entered the room, we found the man face down on the bed,” Cherng Talay Police investigator Rassada Kluengwong told the Phuket Gazette. “We believe he died about five hours earlier.”

In addition to finding the American man’s wallet and other possessions, police found several open beer cans and a variety of prescription drugs.

“The man checked in on Tuesday, February 5. His brother was staying in the same room as him, but left on Thursday,” Teweesak Sae-Kor, the night manager, at the resort told police. “He was supposed to only stay one more night and then checkout by noon on Friday.”

“After his brother checked out at about 10pm on Thursday, the American left the resort and didn’t come back at until 6:30am,” Mr Teweesak explained. “He hanged a ‘do not disturb’ sign on his door, so our staff did not try to wake him until it was time to checkout, as we don’t like to disturb our guests.”

Resort staff called his room, but there was no answer.

Unsure what to do, they decided to wait for him. However, by about 10pm that night they took action and used a spare key to open the room. Once inside, they found his body, Mr Teweesak explained.

“Police have yet to determine the cause of death,” Lt Col Rassada said.

The Gazette is withholding the name of the deceased until relatives or next of kin have been informed.