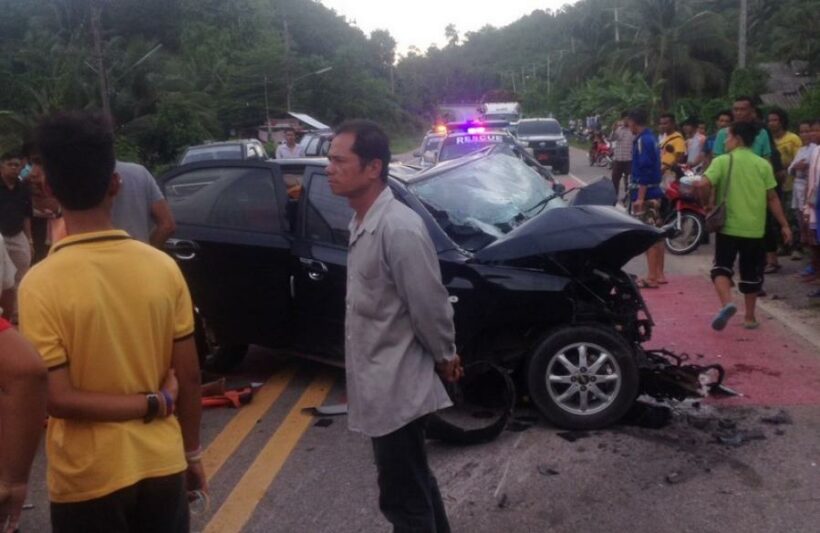 PHUKET: Five suspects were injured in a car crash in Krabi last night after fleeing a murder scene in which a teenager was killed and another injured.

Both were taken to Krabi Hospital for further examination and treatment.

About 10 minutes later, police received reports of a car crash on a bridge in Khlongthom Tai, 10 kilometers away from the scene of the shooting.

“The car was seriously damaged and all five people were injured and stuck inside. Rescue workers extracted the victims from the wreckage and transferred them to Krabi Hospital for treatment,” said Col Danaithorn.

The passengers included a 23-year-old named Ekkaisit Maithong, and four others aged 15 to 17. A 16-year-old boy was seriously injured after a piece of metal punctured his left lung.

“We believe that they were trying to escape from the scene of the shooting and were driving too fast. It was a curved road, so they possibly lost control and crashed into the side of the bridge,” said Col Danaithorn.

At this stage, police are waiting to question the survivors from both parties and have yet to learn the cause for the shooting or charge anyone.

“According to Mr Mong, he was driving his motorbike with Mr Jak as his passenger. A black car drove up to them and one of the passengers shot Mr Jak twice, causing him to fall off the bike,” said Col Danaithorn.

Mr Mong says he tried to flee, but was shot in the back. He shouted for help from people at the scene, who then called rescue workers.

“We don’t believe everything that Mr Mong has told us. We will check CCTV footage from cameras in the area and question the others to uncover what really happened,” said Col Danaithorn.