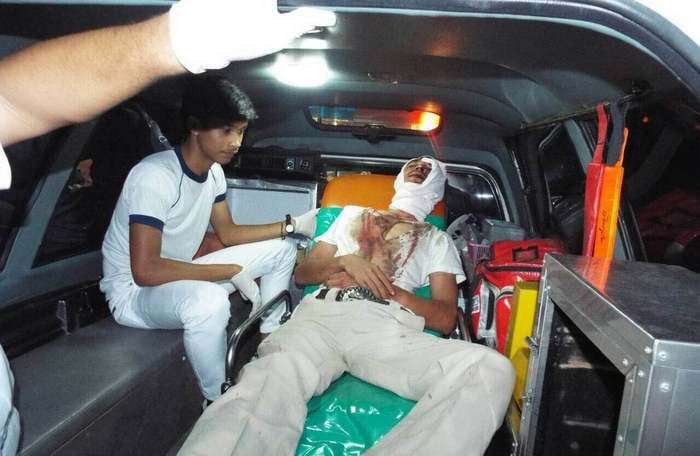 PHUKET: Police have yet to press charges against two cousins who got into a fight last night in Nai Yang, leaving one with a slashed neck and the other with a bruised face.

Police first learned of the incident when Halem Dami, 26, ran up to an area police box looking for help.

“At about 8pm last night, Halem Dami, 26, ran up to one of our officers at a police box near Nai Yang Beach calling for help,” Lt Thanom Thongpan of the Tah Chat Chai Police told the Phuket Gazette today.

“He was covered in blood and his neck was slashed almost half way across.”

Mr Halem was rushed to Thalang Hospital by rescue workers.

“We later learned that Mr Halem worked as a security guard in Nai Yang. He said that the suspect, Abdultolae Daso, 26, his cousin, also worked for the same security company,” Lt Thanom explained.

“Mr Halem told police that he and Mr Abdultolae had been fighting recently over a woman they both are interested in. They had both been trying to sabotage each other at work.

“Mr Halem claimed that Mr Abdultolae came up to him last night and started a fight. They fought for a while then Mr Halem said Mr Abdultolae slashed him with a pocket knife.”

Tah Chat Chai Police immediately notified officers at the Tah Chat Chai checkpoint about Mr Abdultolae so that he could be apprehended if he attempted to leave Phuket, said Lt Thanom.

At about 11pm, Mr Abdultolae showed up at the Tah Chat Chai police station to file a complaint against Mr Halem.

“Mr Abdultolae told police that he had gotten into a fight with Mr Halem and had received injuries to his face as a result,” Lt Thanom said.

“He corroborated the story about their work conflicts and fighting over the woman.”

Lt Thanom said police will not press charges against either of the men until they receive medical reports from the hospital and question the two men together.