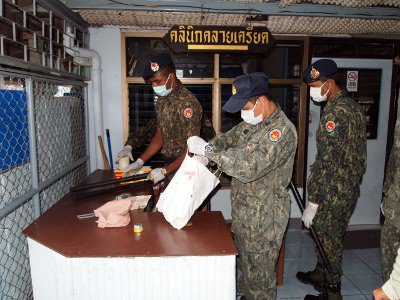 The search for drugs was carried out at 5am by officers drawn from all units of the Phuket police, who also targeted mobile telephones, some of which had been smuggled in “rectally”.

“We regularly have searches at our prison, but this raid was in response to the new government policies to crackdown on drugs. We will continue to conduct searches until we can declare the prison 100 per cent free of drugs. Our main goal is to become a ‘White Prison,'” said Chief Rapin.

The operation, led by Phuket Provincial Police Deputy Commander Pornsak Nuannu, searched the entire prison after 1,615 inmates were rounded up and gathered together.

Despite the search failing to find any drug stashes or mobile phones, Chief Rapin admits that the smuggling of these items still exists at the prison.

“Some friends and relatives of the prisoners still try to send drugs to them by hiding them with other stuff in gift parcels. They need to stop if they don’t want to end up in prison themselves. Whatever illegal substances they try to send through will never make it past our checkpoint,” said Chief Rapin.

“We also seize about 20-30 mobile phones per month when people throw them over the prison wall. Ever since we installed CCTV cameras and Phuket City police provided officers to watch the prison perimeter we have been able to mostly eliminate the problem,” he added.

“Recently, some prisoners tried to smuggle mobile phones rectally back into the prison after being in court. We have busted some trying this as our officers always search them when they return from the outside,” he said.

As part of the search, officers also randomly selected 104 prisoners for a drug test. The results of the testing showed that none of them had taken drugs recently.

Though the search did not turn up any drugs or mobile phones, some prohibited books and small knives were seized, said Chief Rapin.

Coinciding with the prison search, officers launched an island-wide search for drugs.

“We launched the search, ‘[Operation] Tapee,’ by sending more than 200 officers from the Phuket Provincial Police Station to 45 target areas on the island,” said Pol Col Pornsak.

“The search is focused only on drugs and so far I have received many reports. The results will be compiled once the officers have finished the operation,” he added.

Swedish tourist drowns across the bay from Phuket