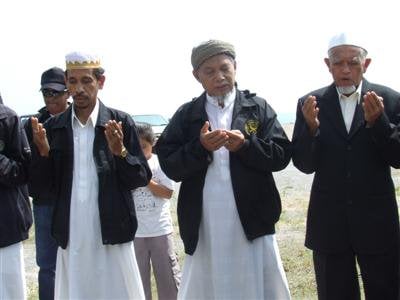 PHUKET DEEP SEA PORT: Muslim clerics and Buddhist monks held religious services on the morning of November 15 to bless 10 aircraft that will be be sunk off Bang Tao Bay to create the “Coral Reef Squadron,” the first artificial reef project of its kind in Thailand.

The Muslim blessing was followed by a Buddhist blessing ceremony, conducted by five monks, that lasted until noon.

After the ceremonies, work began on moving the ten aircraft by crane onto waiting barges that will ferry them to the project site, located about one kilometer offshore.

The aircraft were originally meant to be sunk early in May, but the onset of stormy monsoon-season weather caused project organizers ‘For Sea Foundation’  to postpone the sinking until this month for safety reasons.

According to the project schedule, the loading work will take place through November 22, with the barges departing for the project site on November 23.

The sinking of three planes and six helicopters, expected to take four days, will commence November 24.

The sinking of the final Dakota is scheduled to begin at 9 am on the morning of Saturday, November 29.

When all this is completed, there will be a grand opening ceremony with Tourism and Sports Minister Weerasak Kowsurat expected to preside.

Rainer Gottwald, who heads the Thai Dive Association (TDA) committee responsible for the sinking of the aircraft, said yesterday that everything is going according to schedule and all of the aircraft have now been moved to the edge of the wharf.

Mr Gottwald said he is hoping good conditions at Ao Panwa continue, as the loading of the aircraft with their concrete block supports onto barges is delicate work that requires very calm seas to do safely.

Divers will be able to explore the Coral Reef Squadron as early as November 30, he said.

So far, no fee has been set for people visiting the site, but the TDA is discussing with OrBorJor Cherng Talay the possibility of charging a small fee, in return for which divers would get a small souvenir.

However, he revealed that TDA divers are already surveying sites off Khao Lak, where they are planning their second artificial reef project with the help of the Hotel General Managers’ Club of Khao Lak.

The hoteliers would like to have an artificial reef project off the coastline to boost tourism in the resort area, which is still recovering from the devastation of the 2004 tsunami.