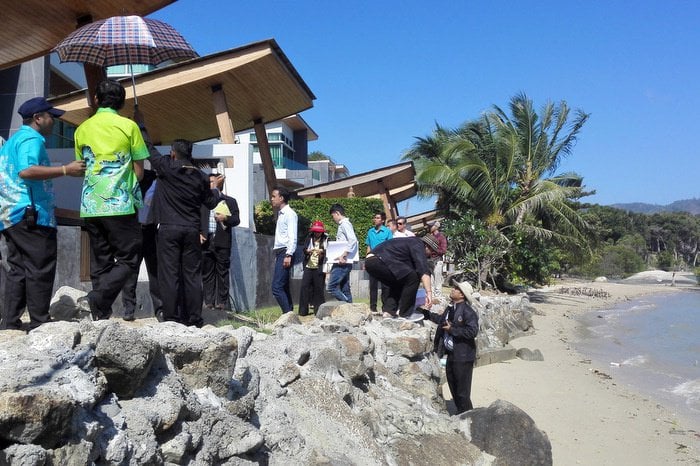 THAILAND stands on the brink of a great leap forward in boosting investor confidence in beachfront properties and resorts, if court officials uphold existing building regulations on construction of buildings along the Phuket shoreline. Here, the Phuket Gazette investigates what is at stake in enforcing the building code.

PHUKET: The environmental court inspection of an upscale real estate project owned by the Eva Group in Rawai on February 6 has opened the door for officials – and developers – to be held accountable for breaches of the building code, especially in relation to beachfront and hillside real-estate projects.

During his inspection of the project in Rawai, Chief Judge Tawatchai Sontiwanit of the recently formed environmental division of the regional Administrative Court responsible for Phuket, revealed that he was leading the investigation ahead of conducting a trial in which Rawai Municipality and the provincial standing committee for approving Initial Environmental Evaluations (IEEs) and Environmental Impact Assessments (EIA) – required by law for all construction projects – were named as the accused.

Rawai Mayor Aroon Solos was at the site to represent Rawai Municipality, and Nattawan Damrongkat of the Ministry of Natural Resources and Environment (MNRE) Phuket office joined the investigation as a representative of the standing committee for approving IEEs, which paves the way for local municipalities to issue building permits.

“Experts will conclude their inspection and submit their report to the Administrative Court,” Judge Tawatchai said. “We will review the report and pass it on to all parties, including the Rawai Municipality, the provincial standing committee and the Eva Group [story here].”

However, Judge Tawatchai declined to reveal specifically what the two organizations were accused of, or why the villa project site was under investigation.

“We cannot reveal any details of the investigation at this stage,” he said. “As the case is under the judicial process, anything we say might be used in the court and affect the case. We will report our findings to the court only.”

While Chief Judge Tawatchai – who took up his post in October last year on an order by Prime Minister Gen Prayut Chan-o-cha – did not want to comment on his investigation, one of the investigators on his inspection team confirmed to the Phuket Gazette that official documents already filed relating to the case could be published.

Among such documents obtained by the Gazette are those showing that the ongoing investigation into the Eva site in Rawai mirrors a previous probe into alleged illegal construction at the same site by the same developer, named in a complaint filed with the Phuket Damrongtham Center (ombudsman’s office) at Provincial Hall on May 11, 2010.

Yet, that investigation lurched into action nearly a year later – only after the Prime Minister’s Office dispatched an official order tasking the court to investigate the complaint, which alleged that regulations governing beachfront construction had been blatantly ignored by officials in the construction of “The Vanilla Project by The Eva Group” (sic).

That complaint specifically named Rawai Municipality and the MNRE) Phuket office as accused of failing to perform their duties in upholding the building code.

Called on to answer on his progress in his investigation into the 2010 complaint, Wongsakorn Noonchukhan of the Office of Public Works and Town Planning of Phuket Province on April 25, 2011, informed the governor at the time, Tri Augkaradecha, that he had already reported his findings six months earlier… on October 12, 2010.

In short, Mr Wongsakorn reported that his investigation had found that the project plainly violated the beachfront building code, but that somehow the project’s IEE and EIA had been approved.

Armed with this declaration, Vice Governor Somkiet Sangkhaosutthirak ordered Rawai Mayor Aroon and the director of the Phuket MNRE office to take action against the offending structures.

In his “Notice for Taking Action as per Authorization”, Vice Governor Somkiet specifically pointed out:

“The said area is located in Zone No 1, as per the announcement of the Ministry of Natural Resources and Environment B.E. 2553 (2010), in which only buildings not exceeding 6 meters tall can be built; and must be at least 20 meters from the shore; and must not leave uncovered space of less than 75 per cent of the land area for which the construction permit was applied.

In full capacity as a vice governor, Mr Somkiet in his notice ordered Mayor Aroon and the MNRE Phuket chief “to take further action according to the power and authorization. Please also notify the progress to the petitioner directly and file the copy to the province.”

In its defence of allowing the project to commence, Rawai Municipality reported to that the building permit was issued on June 15, 2010, as the MNRE Phuket office had informed the municipality that the project had passed its IEE and the project was deemed to be in compliance with the laws codified in the Building Control Act B.E. 2522 (1979).

Rawai Municipality also attested that they had examined the project and found that it had already been modified to comply with the EIA in all respects, and vowed that it had instructed its Engineering Division to follow up and inspect the project on a regular basis.

“If any violations were found, all actions will be taken according to power and authority,” the municipality assured.

Rawai Municipality clarified that it believed the project did not fall under the definition of buildings regulated by the Royal Decree for Applying Building Control Act B.E. 2522 (1979), promulgated as effective in Phuket in 1991. The act deems that specific areas, including dedicated sections of the Thai beachfront, shall be under environmental protection.

Rawai Municipality’s formal reply to the inquiry was sent to the Prime Minister’s Office on April 19, 2011.

Critical to whether or not the beachfront land at The Eva falls under environmental protection, is how far the buildings are from the “shore”.

As Mr Wongsakorn reported to Governor Tri in 2011, one of the main buildings at the site is just 7.5m from the sea – but at high tide. The mud flats in front of The Eva ensure that at low tide, the water’s edge is hundreds of meters out into Chalong Bay.

To clarify this “matter of interpretation”, the General Secretary of the Office of Environmental Policy and Planning in 1999 sent an official request to the director-general of the Public Works Department for all of Thailand, asking for clarification on the law regarding how close to the shore can buildings be.

Chuchart Sutthiphan, Deputy Director-General of the Public Works Department at the time, replied, “by virtue of the Building Control Act B.E. 2522 (1979) [the same law Rawai Municipality claimed to be abiding by] that at this moment there is no clear and definite guidelines.

“However, in general, most local officials will measure at the normal highest sea level as the guideline for defining the shoreline.”

Apparently, that is not so in Rawai, where the buildings were plainly still standing when Judge Tawatchai and his team of inspectors pulled out their measuring tapes on February 6.

The Eva Group has long maintained that it has conducted all its dealings within the confines of the law. At a press conference in 2012, managing director Authanop Pankamnerd assured that all the company’s projects were fully legal, and that it would not have gone ahead with any of them if local officials had not approved the necessary permits (see panel below).

Yet, the court investigation might already be taking its toll. At the time of going to press, direct links on EvaBeach.com to The Eva Group’s projects “The Eva” (click here) and “Vanilla by Eva Group” (click here) were not available, though links remained on the website homepage (click here).

Regardless of what decision Chief Judge Tawatchai rules in the specific case in Rawai, the potential impact of enforcing the beachfront protection law in Phuket is massive, with the possible fallout affecting billions of baht of properties along the coast.

In the Rawai case alone, the impact could reach hundreds of millions of baht. The Eva Group website EvaBeach.com touts its villas as “all units offer uninterrupted sea and island views of the south east coast of Phuket”. Considering project’s location, that claim is beyond doubt.

The villa prices listed on the website range from 42.9mn baht to 53.9mn baht – each… and there are 22 of them, which means the entire project at the cheapest amounts to 948.8mn baht in sales on conclusion.

Multiply that along the rest of the Phuket coast, and the impact could be immense.

At an American Chamber of Commerce (AMCHAM) event held to specifically address the new provisions, the respected law office Baker & McKenzie issued a statement that noted:

“From our analysis, development and land value in Phuket may be significantly affected by the introduction of the Phuket Environmental Regulations, especially ‘mega-size’ hillside villas.

“This impact is demonstrated by the stricter requirements in many aspects.”

Similar new provisions for Phang Nga were brought into effect on July 2 that same year, under the Ministry of Interior’s Town and City Planning Ordinance provisions (story here).

Bill Barnett, founder and managing director of C9 Hotelworks, a Phuket-based leading hospitality consulting firm that specializes in the Asia-Pacific region, noted at the time that the new environmental laws could have wide-ranging effects on property markets in and around Phuket.

“The spectacular rise in oceanfront land values just over the bridge from the island, in what has become known as Greater Phuket, had been pegged for international-style hotels and luxury villa properties,” said Mr Barnett, an expert property columnist for the Phuket Gazette for more than 10 years.

“Looking forward, the new regulations could constrain unchecked real estate price escalation and push development back to Phuket or into Khao Lak, which is not covered under the zoning provisions.”