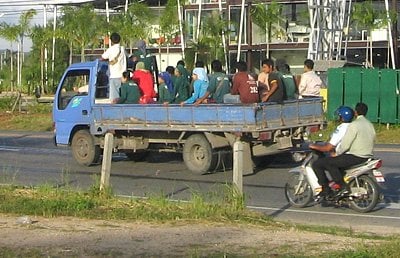 PHUKET: Phuket is facing a shortage of alien labor as the numbers of registered alien workers requesting extensions of their permits are down 15,166 year-on-year, according to official figures.

The Phuket Provincial Employment Office (PPEO) said that this year only 49,017 out of 64,183 registered workers from Burma, Laos and Cambodia extended their work permits.

The vast majority of these, 99% or 48,661 people, were Burmese. There were also 326 Laotian and 30 Cambodians who extended under the program.

Workers from these three countries are grouped separately from others by the PPEO, as most do not hold passports issued from their home countries.

Official sources estimate there could be as many as 100,000 low-wage workers from neighboring countries working on the island.

In a move to legalize more of them, those who can prove that they are from Burma, Laos or Cambodia are able to register as legal workers.

If they do, they are allowed to work for up to two years, but must renew their worker ID cards annually.

The large decline in the number seeking work permit extensions shows that there may have been problems with workers obtaining identification in their home countries.

Some are believed to have returned home, while others have remained working illegally in Phuket, where trucks packed with Burmese and ethnic Mon workers are a common sight on roads.

Phuket Immigration Superintendent Phanuwat Ruamrak told the Gazette that from October last year, Phuket Immigration deported around 5,000 illegal workers, 90% of whom hailed from areas under the control of the Burmese government.

Phuket is not the only province in Immigration Police Region 6 to have a problem with unregistered alien workers.

“Our numbers are still lower than Songkhla and Surat Thani provinces,” he said.

“I can’t tell what happened with the missing numbers; maybe they went home, or perhaps they are still working here. We will continue to search for illegal alien workers.

“I have spoken to employers in Phuket and found that we still need more alien workers, who tend to work hard for less pay than Thai workers. They usually take only one day off a year as well,” he said.

PPEO statistics show that this year 7,472 employers registered with them, asking for 120,000 workers.

In chorus with Col Phanuwat, PPEO chief Nopadol Ployoudee said, “Most alien workers are doing difficult and dirty jobs like cleaning, construction and fishing…These are jobs that Thai workers don’t want to do and that’s why we need more alien workers,” he said.

“In the near future, we will have a team from Bangkok working in the search for illegal alien workers to ensure that we will have only legal workers in Thailand,” he added.