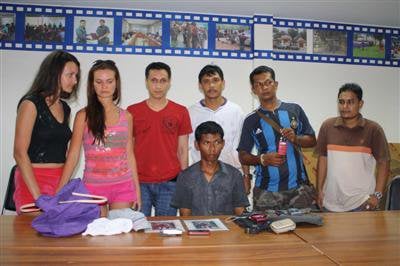 PHUKET: Chalong Police last night arrested a fried bug vendor for stealing the belongings of a Russian tourist as she swam off Karon Beach.

Chalong Police identified the culprit as 33-year-old Patipaan Nonephayome, a native of Prachantakham District in Prachinburi.

Patipaan confessed to stealing a shoulder bag belonging to 26-year-old Russian Osana Kunakova around dusk as she swam with a friend, also Russian.

As she emerged from the surf, Ms Kunakova noticed the thief scampering over a sand dune into the darkness with her belongings and called for help.

Patipaan got away with a large purple beach bag containing a mobile phone, digital camera, towel and other personal items.

Their efforts paid off a few hours later when they came across Mr Patipaan standing at Karon Circle with a cart of fried grasshoppers, a popular treat among Thais from the North and Isaan regions.

A search of the man uncovered Ms Kunakova’s digital camera, still containing images of the victim.

Faced with the evidence, Mr Patipaan confessed to stealing the camera.

He led police to a pine tree not far from the site where the theft occurred, about 300 meters from Karon Circle.

Stashed away high up in the fronds, they found Ms Kunakova’s bag as well as a second bag stolen recently from another tourist.

Ms Kunakova and her friend were taken to Chalong Police Station to identify Mr Patipaan, who was charged with theft.

Ms Kunakova told police she was employed by a Russian logistics firm. She was nearing the end of a three-week holiday in Thailand and staying at the Sugar Palm Resort in Kata.

Such thefts are rare at west coast beaches in Phuket, where most tourists rent out beach chairs and swim while their belongings are kept under the watchful eyes of beach chair operators.

Most thefts and other crimes on the beach take place after nightfall, when beach chair operators have gone home.

Immigration to check on UK pedophile’s trip to Phuket