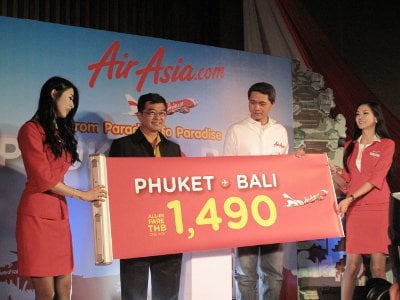 “I know it’s a challenging route, but with the high number of people visiting Bali, I believe that some of them may want to visit Phuket, too,” Thai AirAsia CEO Tassapon Bijileveld said at the launch yesterday.

“I also believe that Scandinavian tourists in Phuket want to visit Bali, and that Australians, who visit Bali all year long, want to come to Phuket, as well,” he added.

The average load factor for December through January, the peak tourism months for both Phuket and Bali, is expected to be 85% to 90%, Mr Tassapon said.

Passenger seating capacity on each flight is 180.

If the route proves successful, the service could be boosted to daily flights within two months, the CEO said.

“We still don’t know what the load factor will be during the low season. We need to do a lot of marketing in the first three months. If it is about 70% to 75%, then it will be okay,” he added.

The direct scheduled flights are the first ever between the rival resort islands, both of which have had their share of ups and downs over the years.

In 2005, then-Governor Udomsak Uswarangkura reacted with indifference to an offer to link Phuket with Densapar, the capital of Bali, made by Indonesian Ambassador Ibrahim Yusuf during a courtesy call to the island. The perceived snub came just two months after the terrorist bombings that left 20 people dead at two sites in South Bali.

Regarding domestic services, CEO Tassapon said the number of flight reservations within Thailand had returned to normal, except in Songkhla and Ubon Ratchathani, which were affected by the recent floods.

“Reservations fell to 50%-60%, but we did not cancel any flights because many items needed to be delivered to flood victims. I think 15 days from now the number of reservations made in every province will be better,” he said.

Also at the launch was Phuket Vice-Governor Nivit Aroonrat, who pointed out that the new route would bring more tourists to Phuket and add pressure to resolve long-standing infrastructure problems.

The “taxi problem” and lack of public parking at beaches and other tourist destinations were among the matters that require action, he said.