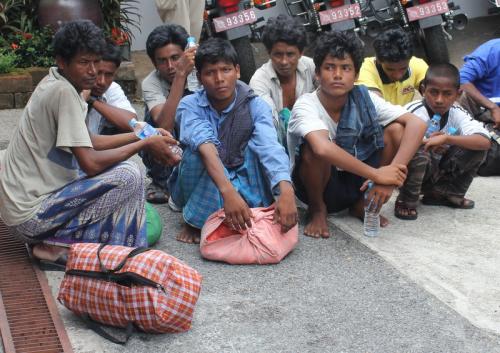 PHUKET: The boatload of 91 Rohingya forced to land yesterday on Koh Lone, off the south end of Phuket, have been taken into custody and will face yet another deportation, this time from Thailand.

The group, who were forced to land on Koh Lone because their boat engine seized, told reporters they were taken into custody by Indian authorities on about January 26 and escorted out of Indian territorial waters on March 19.

The group, which includes three women and seven boys, are now being held at Chalong Police Station where officers are recording their arrival, officially placing them under arrest.

Phuket Marine Police along with Rawai Mayor Arun Soros and other village officials recovered the refugees from the island this morning.

“The men, women and children were tired and hungry,” Lt Jeerayuth Onthong of the Marine Police told the Phuket Gazette.

“We gave them some food and water, then let them shower and pray before we brought them to Chalong Police Station,” he said.

Talking through a translator, the refugees explained strife-torn Rakhine State in Myanmar (story here) on January 22.

“On January 26, they went the wrong way and entered Indian territorial waters. They were arrested by Indian Police, then ‘pushed out’ of the country on March 19. They headed off to the same destination, Malaysia,” he added.

“They are now being placed under arrest. After they have been processed they will be handed over to Phuket Immigration, who will begin the process to have them deported,” Lt Jeerayuth said.

Meanwhile, Wichit Police arrested 11 other Rohingya at a mosque on Cape Panwa at about 8am today.

“We believe they are from the same boat. They are now at Phuket Immigration,” explained Lt Jeerayuth.

Capt Angkarn Yasanop at Phuket Immigration told the Gazette, “We received 11 Rohingya from Wichit Police at about 3pm. There are nine men, one woman and a 10-year-old boy in the group.

“We are waiting for the other group to be recorded at Chalong Police Station. Once that is done, they will be transferred here,” he explained.

“Meanwhile, the boy will be sent to a refuge shelter on Koh Sireh [on the east side of Phuket Town],” he added.