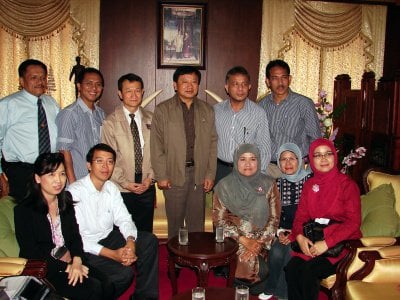 PHUKET: A delegation of medical staff from the Indonesian province of Aceh is in Phuket to seek assistance in developing their own tsunami search and rescue training drills.

A total of 226,000 people were killed or went missing in the 2004 tsunami, the majority of which were Indonesians.

About 65 per cent of the 170,000 Indonesians who died in the disaster were in Aceh, at the northern tip of Sumatra. The tsunami also left roughly 500,000 survivors homeless.

Director Taufik said the main purpose of the visit was to sign a Memorandum of Understanding (MoU) with the PPHO to help train Aceh medical personnel in conducting tsunami rescue drills.

The MoU was to be signed at 8.30am today at Saphan Hin, before a tsunami rescue drill starts there.

“We would like Phuket to help us improve our ability to manage hospitals, medical teams and people when faced with a disaster, especially a tsunami. We ask for help from Phuket because Phuket has developed a good reputation for its disaster rescue capabilities after the tsunami.

“Although much help had been received in rebuilding Aceh since the 2004 tsunami, the special territory had yet to develop its own ‘quality rescue operation'”, said Dr Taufik.

PPHO Deputy Director Wiwat said, “Once we have finished the initial training, we will not abandon them. After six months, we will go back to monitor their improvement.”

The Aceh delegation arrived in Phuket on Tuesday. They return home today after taking part in the Saphan Hin drill this morning and a second exercise at Phuket International Airport this afternoon.

The United Nations Development Program (UNDP) days ago released a report praising the recovery efforts in Aceh, calling the rural province’s progress over the past six years “remarkable”.

“The achievements in Aceh since the tsunami go beyond anything imaginable six years ago,” said Stephen Rodriques, UNDP Deputy Country Director.

Phuket Poll: Is our tap water safe to drink?