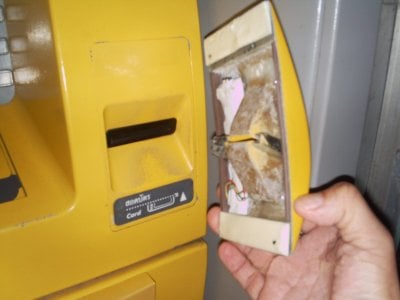 PATONG: Police are warning credit card and bank card holders to exercise caution when using ATMs and other “swipe” machines in Patong after an ATM on Soi Bangla was found fitted with devices capable of recording card data and pin numbers.

Kathu Police Superintendent Col Grissak Songmoonnark told the Gazette that Patong police received a call from an English tourist about 11 pm Friday after he had problems using his credit card to withdraw cash from an ATM on Soi Bangla.

Col Grissak said that after the tourist removed his cash from the machine, he found it difficult to remove his card because it was stuck in the insert hole.

“He then tried to force his card out and he was surprised when a fitting glued over the insert hole came loose,” Col Grissak said.

He explained that the ATM had two devices fitted to it. Glued over the insert hole was a scanning device to extract card data as the card was inserted into the ATM, and an extra keypad was fitted over the ATM’s original keypad so that PIN numbers could be recorded as they were entered by unsuspecting users.

“Both devices look like the real ones and they record information from cards used at those ATM machines,” Col Grissak explained.

Since the discovery that the Krung Sri Bank (Bank of Ayudhya) ATM had been tampered with, Kathu police officers have been ordered to check on every ATM in Patong, Col Grissak said, as he expects that the Soi Bangla ATM was not the only one in Patong fitted with a scanning device.

“We found another machine not far from the first one that also had scanning devices fitted to it,” he said.

“The information recorded is transferred to a computer and then used to make fake credit cards, which are used in many ways, such as buying things over the Internet,” Col Grissak said, adding that major banks have been alerted to the discovery.

Police have received only one complaint about dodgy ATMs, Col Grissak said. “If the information from their credit cards is copied, it can cause them a lot of harm, but so far we have yet to receive complaints from any other tourists about it,” he said.

Col Grissak, a former high-ranking Tourist Police officer in Bangkok, said, “In my experience, gangs try to steal credit card information in tourism areas, such as Bangkok, Pattaya and Samui, but this is the first time we have found this in Phuket.”

Although police in Phuket have yet to catch the culprits responsible for refitting the Patong ATMs, Col Grissak said that a credit card gang was arrested yesterday morning in Bangkok.

“We also caught a gang from Sri Lanka at the beginning of this year. They used fake credit cards to buy things. The same gang operated in Phuket, too,” he said.