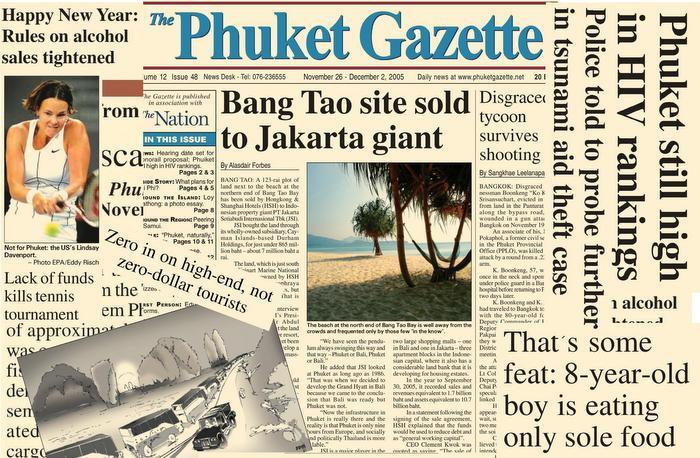 PHUKET: Frequent readers of the news are familiar with the ‘long-awaited’ lightrail project, whose tracks will guide dramatic change in the desolate Phuket public transportation landscape. Now what exactly does ‘long-awaited’ mean? Months? A year? Five years? A decade?

In this particular case, a decade ago seems most appropriate, as the topic dominates page 2 of the November 26 – December 2, 2005 issue of the Phuket Gazette. Though the originally proposed system would link the airport and Phuket Town with a west-coast route to Patong, only a whopping 80 people were expected to attend the first public hearing.

“Phuket’s roadsides are lined with parked motorcycles and peddlers selling their wares, as well as tuk-tuks parked one after the other in Patong. There is no parking space. Phuket is an international city, so visitors have high expectations as to the quality of life and services they will find here,” public transport expert Dr Tawatchai Laosirihongthong said at the time. Such a statement could easily be lifted and dropped into any cafe conversation on the island now – assuming the speaker has factored in the boom in private cars on the island following Thailand’s first-car buyer scheme, which has resulted in endless bumper to bumper traffic during rush hour.

Tawee Homhuan, a committee member and engineer at the Phuket Public Works Office, said at the time that the number of people in attendance should in fact be closer to 800, but in his experience only a few dozen people would actually attend the hearing. However, once the actual work started on the project, hundreds turned out to protest its perceived negative impacts on their lives.

Such form of protest, of course, wastes time and money. However, the recent success of protests by the Rawai community in stuffing a movie museum construction plan that threatened a grove of trees at Nai Harn beach, is without a doubt a great success. The movie museum plan had gone through all community hearing stages. However, the impacts of the plan on the beach community were not fully understood until trees were marked for the ax with a great big ‘X’ on their trunks. Post-approval, pre-construction protests clearly remain a double-edged sword.

Jumping into the decade old column ‘Time Machine’ to take us back to the November 15-30, 2000 issue, one is faced with a startling revelation. The headline reads: Police to take softer line over traffic violations. Fast forward 15 years, and police are scrambling to curb drunk driving, speeding and a number of other traffic violations that are witnessed on Phuket’s roads daily. However, fifteen years ago police decided that they would be issuing fewer tickets for traffic offenses.

This led to a 70 per cent decrease in traffic violation citations.

Lt Col Teeraphol Thipjaroen, deputy superintendent at the Phuket City Police Station at the time, said most offenders would be given verbal warnings. However, those who broke the law in ways that endangered other peoples’ safety would still get tickets. Please remind me what traffic laws are put in place that aren’t designed to ensure the safety of the driver, passengers and other motorists? Sadly, the relaxing of enforcement all stemmed from riots in the streets of Nakhon Sri Thammarat, after motorcycle riders went on a rampage over what they perceived to be excessively strict enforcement of traffic laws.

Well, there you have it Phuket… indifference to desperately needed infrastructure projects (at least the light rail project has the backing of Bangkok and is full-steam ahead now); protests for good causes (got to save them trees); and protests that have ultimately resulted in the deaths of thousands due to relaxed traffic policing unbelievable that it really took 15 years to realize this wasn’t the best way forward.