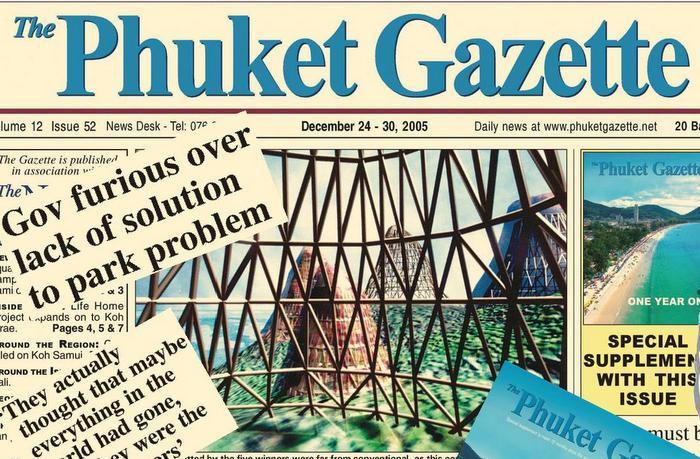 PHUKET: Ten years ago, with the Thai Tsunami Victim Identification (TTVI) unit wrapping up its final case, Phuket – along with the rest of the world – stopped to reflect on the devastation caused by, and the recovery from, the Boxing Day tsunami.

The Phuket Gazette marked the one-year anniversary with a special supplement entitled ‘One Year On’. Inside, then Phuket Governor Udomsak Uswarang recalled the day of the incident, from the first notification that something was wrong – “there was flooding in Karon” – to the view of the annihilated west coast from a helicopter and the realization that the natural disaster contingency plan was unworkable.

On the next page of the publication is an entire page dedicated to how the new tsunami warning system works. However, it took years for the system to actually ‘work’ as it was intended to, with valuable copper wires being stolen at one point in the island’s history. This system, in fact, was one of the many legacies of the waves that was revisited when the Gazette teamed up with The Nation and the Asian News Network last year to produce an awarding winning project – not only to recount what had happened, but also to see if indeed the promise to help rebuild communities and lives had been delivered.

Nearly ten years apart, the trajectories of the two commemorative publications are not so different.

Though the devastation and reality of the disaster resonated in the core of all those in the region in 2005, it was still balanced out with the hope of recovery, as seen in the words of Franky Gun:

“When I was asked to write about the Khao Lak area in the year after the tsunami, I had mixed feelings. I was directly affected by the disaster, losing my beloved parents, great friends and neighbors, my pets, house, car and almost everything else I owned. I, too, almost drowned. It has not been pleasant digging around my post-tsunami memories, especially those of the months from January to March…

“This personal account is meant to show the emotional and psychological recovery a tsunami survivor experiences; it is not an exercise in self-pity, but a possible aid to understanding the scope of the tragedy – and to prove that emotional recovery is quite possible. I hope it will help readers who have lost loved ones to gain emotional strength by realizing that they are not alone.”

Though their was a publication dedicated to the tsunami inside the December 24-30 issue, the issue itself was full of tsunami headlines: Wave memorial finalists chosen; 100,000 candles to light up Phuket; Skeleton from Khao Lak is last case for TTVI Phuket; Rain damps tsunami drill.

Even now, a year after having created a publication marking the 10-year anniversary of the waves, the tsunami finds its way into headlines from candlelight vigils on Patong Beach to tsunami warning drills.

Opinion: What a long, strange trip it’s been