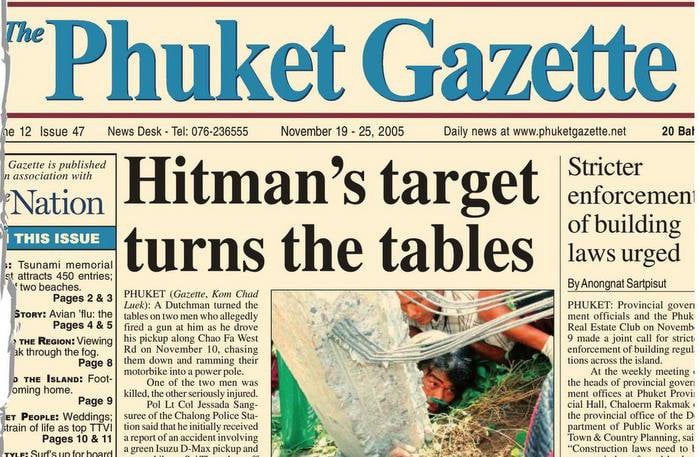 PHUKET: Though the page one story of the 2005 November 19-25 issue is without a doubt the sexiest story of the week, it is the editorial that strikes to the heart of an issue that remains unresolved even now, ten years later: land zoning.

Just 15 years ago it was apparently easy enough for corrupt officials in the Land Office to produce a computer-generated contour map showing that just about any piece of Phuket property was in fact below the 80-meter construction limit – pending financial compensation. With that beast somewhat reined in 10 years ago, the Phuket Gazette turned its concerned eye to coastal zoning.

It is vital that Phuket gets zoning laws, the Gazette said.

“This would ensure the more beautiful parts of the island are not spoiled by thoughtless development, but are preserved for low-rise, low-key projects, while other, less attractive areas are slated for mega-developments that could, it might be argued, improve the coastline. The key to success, of course, will be who decides which is which.”

Phuket, now, does indeed have proper zoning for the coastline. However, who signs off on where those zones actually start and end… well, that is continuing to cause issues.

Perhaps the most recently publicized issue revolves around the Eva development. Given the case has a number of local officials involved and serious amounts of cash tied up in it, and is still under investigation, it’s best not to delve too deep into the story. However, the crux of the matter appears to be where the high-tide mark is. The high-tide mark, which admittedly changes with time, as the ocean steals some bits of beaches, is where zoning measurements begin. They are in place to preserve the island’s beauty that ten years ago, the Gazette feared would be lost. Take a walk down some of the Phuket coastlines during high tide – and without naming any names – tell us what you think.

Don’t worry, just because we launched into the meat of the issue, doesn’t mean we will be skipping all the sexy stuff on page one. Dutchman Jen Jensen was a hero of sorts – though at the end of the day he was charged with negligent driving causing death.

Mr Jensen gave chase in his truck after a failed assassination attempt, eventually crashing into the suspects on their motorbikes, killing one. Though business or property related assassination attempts are oddly still common on the island – let us not forget about Ae Inside, Phuket media man, or Jintana Mahattanapak, human resource manager and mother of two – Mr Jensen did what many an expat fantasizes about: seeks immediate vengeance. Though those wishing to take the law into their own hands are without a doubt forced to pay the consequences.

Two-year-old drowns after wandering away from home