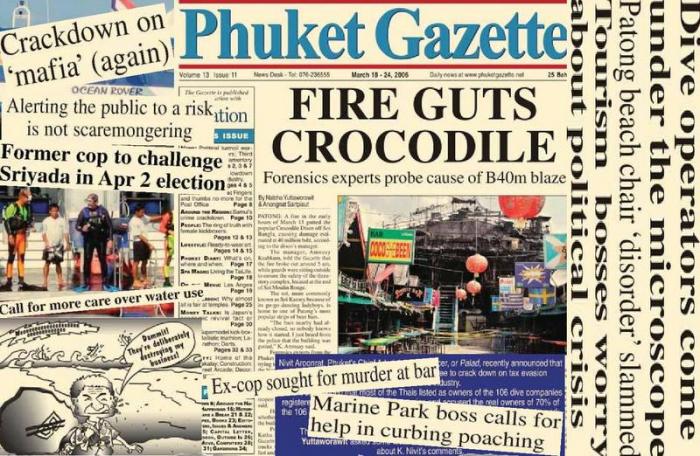 PHUKET: Fears that beach vendors’ unrelenting attempts to retake the beaches will eventually wear down Phuket officials’ willingness to enforce the 10 per cent zone and virgin beach regulations are well founded. Ten years ago, in the March 18-24 edition of the Phuket Gazette, we documented rental operators reneging on a deal – struck after the tsunami – between their representative organization and the Patong Municipality.

Ruling kingpin at the time, Pian Keesin, who passed away while under investigation for alleged mafia activity in 2014, explained that the agreement had been for a total of 2,300 beach sets, each consisting of an umbrella and two loungers, to be set out in two rows. However, due to the ‘unexpectedly large number of tourists coming to Phuket’, he agreed to be flexible and allow a third row.

“The government didn’t want to have any beach chairs at all. But we proposed 2,300 sets because we thought that the tourists wouldn’t come back for at least three years. But they’re back in far larger numbers than we expected,” explained a beach chair representative at the time.

Nonetheless, Mr Pian slammed the vendors for the disorderly setup, which was, in fact, blocking some tsunami evacuation routes just a year after thousands were lost to the waves. Clearly, Mr Pian’s battle did not end up resulting in orderly beach chairs catering to the needs of tourists. Only a few years ago, the Gazette documented thousands of empty beach chairs dominating west coast sands and preventing tourists from setting out blankets as the vendors staked out ‘their’ territory.

Only time will tell whether or not the National Council for Peace and Order’s campaign to ‘clean up’ Phuket’s beaches will stick, or if it, too, will be worn away be the ever crashing waves of beach operators’ greed.

The lead story of the issue, however, wasn’t beach chair chaos. It was: ‘Fire guts Crocodile – Forensics experts probe cause of B40mn blaze’. What leaps to mind faster than a flame to petrol is a much more devastating Patong disco blaze that occurred six years after the Crocodile was ashed. Unlike the Crocodile Disco fire, in which nobody was reported injured, the Tiger Disco inferno claimed four lives. The key difference in the blazes that consumed the two popular Soi Bangla buildings was the fact that Tiger Disco still had patrons and staff inside. It appears that any lessons that could have been gleaned from the gutting of Crocodile were clearly not heeded. We can only hope that the deaths of the four people at Tiger Disco has led those in charge of fire regulations at these night-life venues to make real changes, so that we will be unable to draw new parallels ten years from now.

Now, one industry that is teeing us up for parallel drives into water hazards is the dive industry. Recent diving deaths and serious injuries have led officials to consider what regulations, if any, should be set in place in addition to those already established by PADI, SSI, CMAS and other diving certification agencies. As a preemptive measure – to show the government that there are regulations in place and to push dive professionals to adhere to them – PADI held a seminar last week. Ten years ago, though, it wasn’t diver safety that had the industry in hot water, it was tax evasion and Thai nominee shareholders.

Phuket’s Chief Administrative Officer at the time, Nivit Aroonrat, complained that most of the Thais listed as owners of the 106 dive companies registered in the province were mere proxies and accused the real owners of denying Thais the right to work in the industry.

Some in the industry welcomed the crackdown, saying, “Dive companies should work harder at being good corporate citizens. There are still some dive shops that employ foreigners without work permits and there are many dive boats that are not up to Western safety standards.”

Such concerns remain in the dive industry today – the Russian diving instructor who was maimed along with a fellow national under his care was charged for working without a work permit earlier this year. However, that isn’t the government’s central concern with the companies at the moment.

It would be nice not to lose the industry’s revenue stream to the coral bombies of Myanmar.