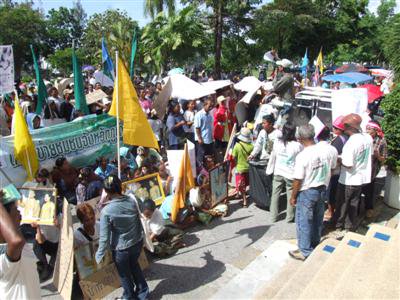 PHUKET: A crowd of several hundred people from poor communities in Phuket gathered in the grounds of Phuket Provincial Hall yesterday morning to demand swift action be taken by the Phuket Governor to improve living conditions in their communities.

The sit-in was organized by the ’30 Communities Network’, which comprises poor communities in Phuket, including the Pla Katak Pattana Community on Koh Sireh, Phra Barami Soi 8 community in the Kalim area of Patong and at least four sea gypsy communities.

Citing long-standing disputes over land ownership, access to utilities, education and employment, the activists claim they have waited for four years for legal and financial assistance from the government since their homes were destroyed by the 2004 tsunami.

Network leader Pat Nunkhao said people in the communities wanted government to make good on promises made to them by former Governor Niran Kalayanamit in 2007.

Under the 2007 agreement, the province would set up a committee to verify land ownership rights, thus providing a legal framework under which basic utilities could be provided.

Speaking on behalf of the sea gypsy community at Rassada Pier in Phuket City, Ms Putipron Tipwong said, “We have not come here to protest, but to welcome the new governor and to remind him of promises made by previous governors to help solve some of the problems still faced by our communities since the 2004 tsunami.”

Ms Putipron told the Gazette that after the tsunami, many people claimed ownership of land that was previously occupied by sea gypsies and that the ongoing disputes over land entitlement have meant nothing has been done to improve living conditions for them.

“Governor Wichai Prai-sangop is the fourth Phuket governor since the 2004 tsunami. Each of them has promised to help solve the problems we face but they are always transferred before any real progress is made,” said Ms Putipron.

“We are not here to make problems but we do want to see action taken that will improve the lives of our community members,” she said.

Accepting this and perhaps worried about the rainy conditions yesterday, all of the protesters eventually dispersed by about 10pm.