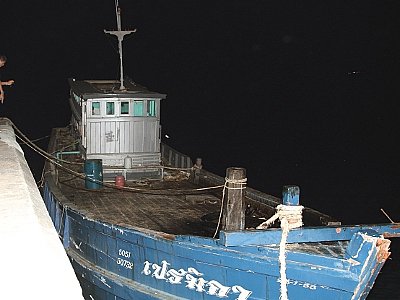 PHUKET: Police on Friday seized 40,000 liters of smuggled fuel aboard a modified fishing boat at the Phuket Deep Sea Port.

The arrests were made just before dusk by a regional police special task force set up to prevent smuggling of fuel, together with the Marine Police in Phuket and officers from the Phuket Provincial Excise Office.

Acting on a tip-off, the officers did an inspection of a 20-meter trawler named Premika tied to the wharf at the port, located at Panwa Cape in Wichit subdistrict.

Inside the hold they found some 40,000 liters of heavy fuel oil and arrested the vessel operator, identified as local resident Anusit Kebsup.

Mr Anusit was taken to Phuket City Police Station and charged with smuggling oil, and then transferred to the new Phuket Provincial Excise Office where the damage to the state in unpaid taxes was assessed so that a fine could be issued.

Mr Anusit, whose surname indicates he is a member of the locally-powerful Kebsup clan, said he was only hired to look after the boat temporarily and was not its owner.

He identified the owner as a man named “Mack”, whose real name and surname he said he did not know.

He also claimed he didn’t know the boat was laden with smuggled oil.

Members of the task force said they would begin to conduct regular inspections at the port to prevent further incidents of oil smuggling there.