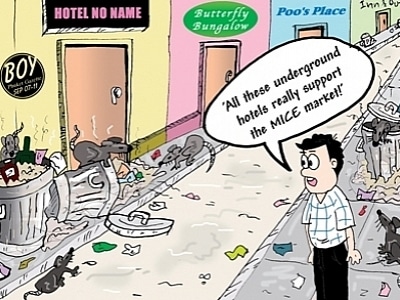 PHUKET: The Phuket Gazette wishes Governor Tri Augkaradacha the best of luck in his efforts to make legal the unknown thousands of unregistered hotels on the island – he is certainly going to need it.

According to figures from Gov Tri’s office [see page 8, current issue of the Gazette, or click here for our digital version], there are just 279 hotels with a total of 31,014 rooms legally registered with Phuket province under the Hotel Act.

But there are an additional 43,000 rooms in more than 700 “accommodation establishments” registered with another government agency: the Tourism Authority of Thailand. The actual number of these hotel rooms in Phuket is undoubtedly much higher because all establishments with more than four rooms for rent on a daily basis are classified as hotels under the Hotel Act.

Phuket Tourist Association president Somboon Jirayus estimates the number of rooms-for-rent by the day in guesthouses, serviced apartments and similar establishments at more than 50,000.

Typically-priced at about 500 baht a night, a room in one of these establishments is clean and comfortable, air-conditioned, equipped with wi-fi internet and a cable television service with at least 50 channels.

While the ubiquity of so many cheap lodgings continues to lure in ever more visitors, many in the middle and upper segments of the hotel business cry foul that so many of these establishments are able to operate outside the law, avoiding taxes and ignoring safety regulations.

We understand and certainly applaud their protestations, particularly with regard to issues of safety and hygiene.

Gov Tri notes that lax enforcement by the government in the past has allowed the current situation to develop, and he is realistic in believing that some “negotiation” may therefore be needed to correct it.

We doubt, however, that simply trying to persuade illegal operators to register “for their own benefit” is going to lead to significant change. After all, how many of us would actually pay our income taxes honestly, fully and punctually if there were no threat of an audit hanging over our heads?

Disincentives to register are especially high among guesthouse and serviced apartment owners, whose guests are predominantly independent travelers not on package tours. In their view, registration as a hotel simply opens a Pandora’s Box of new rules and regulations that would need to be adhered to at considerable cost.

The need to comply would also doubtless expose accommodation providers to additional sub rosa payment and ‘protection’ demands from some of Phuket’s more entrepreneurial government officers.

It is also worth noting that some registered hotels have ‘dug in’ and refuse to pay the one-percent room revenue tax imposed several years ago by the Phuket Provincial Administration Organization, despite periodic threats of legal action by that authority.

Ministerial regulations issued in 2008 to clarify the terms of the national Hotel Act have likewise been largely ignored in Phuket, mainly, we think, because so many operators have no real incentive to comply.

Sunday Opinion: Meth, mobiles and keeping the peace in Phuket