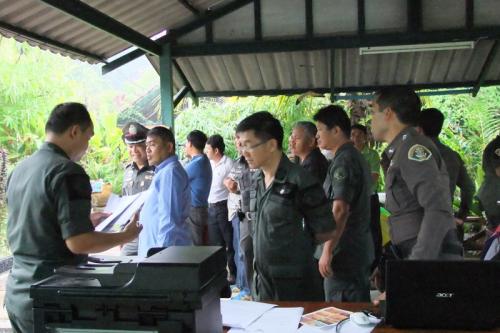 PHUKET: Officers from the regional Natural Resources and Environment Crime Suppression Division raided seven tour companies in Phang Nga this week following reports that the companies were in possession of illegal elephants.

“These seven companies train elephants to perform shows and provide trekking tours to tourists. All of them are located in Song Phraek, in Muang District, Phang Nga,” he added.

The officers found a total of 40 elephants they suspect of being acquired illegally.

“We also found that some of the companies have encroached into protected forest lands,” Col Watcharin said.

“We questioned tour company operators about the elephants and asked to see elephant registration documents, but our investigation remains inconclusive. We still cannot say if those 40 elephants are illegal since the operators could not give us clear information,” he said.

Col Watcharin is now assembling a team of about 100 officers to conduct further investigations.

“If we find the elephants are illegal, we will press serious charges against the tour operators,” he warned.

Col Watcharin did not elaborate on whether the raids would be extended over the bridge into Phuket.