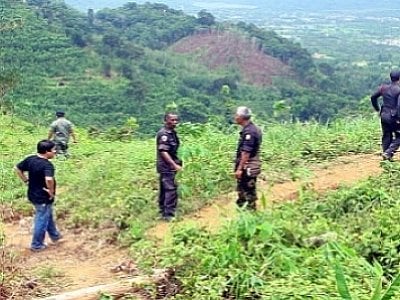 PHUKET: Officials raided an illegal logging site in the Nang Panturat hills in Rassada yesterday morning only to find the site abandoned.

Acting on a tip from concerned local residents, Muang District Chief Supachai Pochanukul and Phuket City Police Superintendent Chote Chidchai led a team of Forestry Department officials into the hills near Toh Sae Hill in Phuket Town at about 10am.

However, on reaching the clearing, which covered many rai of land, all they found were felled trees, officers said.

Tawee Yusuk, an officer attached to the Forest Protection Unit Phuket 2, which accompanied the senior officials, said some of the trees were estimated to be about 60 years old.

Among the trees were Hopea and ‘White Cheese’, which officers reported were worth hundreds of thousands of baht once processed.

All wood at the site was seized as evidence for further examination.

Mr Tawee said that encroachment in the Nang Panturat hills was becoming increasingly common and that much of the natural vegetation had been cleared to make way for rubber plantations.